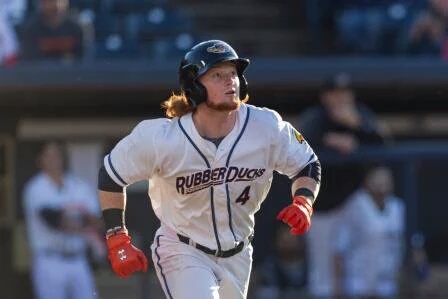 Akron snapped a two-game losing streak with an 11-4 blowout, thanks to great starting pitching and an offense that was clicking all game long.

The outfielder got the start at designated hitter, batting third in the lineup.

Frazier entered play with a .313 batting average (2nd in the Eastern League,) leading the league in doubles with 17.

Morimando did not have his best stuff early on, allowing two runs in his first three innings of work. One of the runs was earned, while the other was attributed to a fielding error.

The southpaw settled down from that point onward, not allowing a run in his next three innings of work.

Akron’s offense struck early and often, as right fielder Jordan Smith doubled and homered in his first two trips to the plate.

The RubberDucks put five runs on the board in less than four innings, thanks in large part to center fielder Todd Hankins, who drove in three runs with a double and a sac fly, sending Altoona’s right-handed starting pitcher David Whitehead to the showers after just 3.1 innings of work.

The Curve made a pitching change, inserting right-handed reliever Edgar Santana to face Frazier with one out in the bottom of the fourth, and the first-round draft pick slapped a single to left, driving in his 22nd run of the season to make it 6-2.

Neither side could plate a run for the next two innings, as Frazier had a golden opportunity to blow the game open, but struck out with the bases loaded.

Morimando’s night would end after six innings of work and Altoona quickly cut into the deficit, making it 6-3 after a triple and a sac fly off of right-handed reliever Robbie Aviles.

Aviles would bounce back and keep it a three-run game heading into the seventh inning stretch.

The RubberDucks responded in the bottom half of the seventh, as second baseman Ivan Castillo drove in shortstop Eric Stamets with a fielder’s choice RBI to make it 7-3.

Frazier stepped up to the plate in another great RBI situation with runners at first and second and two down. He drew a four-pitch walk to load the bases for power hitting first baseman Nellie Rodriguez.

The Curve went to right-handed reliever Montana DuRapau to try to put the fire out, having to face catcher Eric Hasse, who was the only RubberDuck without a hit up to that point.

Hasse pulled a bases-clearing double to left, driving in three runs to make it an 11-3 game.

Mercifully, the inning ended after Akron put a five-spot on the board to remove all likelihood of a comeback.

Altoona would tack on a run after a lead-off triple in the top of the eighth, making it 11-4.

The Akron onslaught would continue in the bottom of the eighth, as the RubberDucks loaded the bases, but right-handed reliever Jonathan Schwind left the runners stranded.

Morimando improves to 9-0 with the win and his ERA on the season falls to 1.63.

Frazier finished the night 1-for-4 with an RBI single and a walk, scoring one run. He struck out twice, ending the night with a .311 batting average on the season.

Stamets went 3-for-4 on the night with two doubles and a single.

Hankins and Smith each finished the night with two hits. The RubberDucks piled up 13 hits and seven different players drove in runs on the night.

Whitehead falls to 2-5 with the loss and his ERA drops to 6.28 on the season.

Also of note for Altoona, St. Edward’s High School graduate Stetson Allie went 2-for-4 in the game with an RBI double and an infield single.

The RubberDucks improve to 36-15 on the season, stretching their lead over Altoona in the standings to 7.5 games. Akron and Altoona are back at it again on Wednesday night at 6:35 PM in the second of a three-game set.