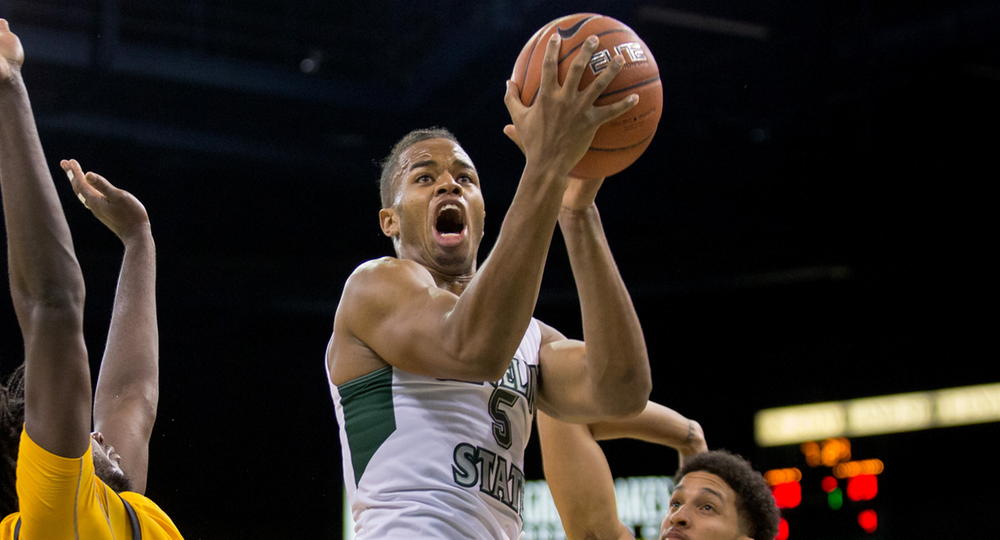 THE COPPIN STATE SERIES:
•     Friday will be the first meeting between the two schools in men’s basketball.
•    It is one of just two teams that CSU will play for the first time in program history this year (ECU on Nov. 20).

CARPENTER DOUBLES UP:
•     Kenny Carpenter recorded his first career double-double with 11 points and 12 rebounds in the season opener at Akron (Nov. 11).
•    Carpenter also added a team-best four assists and a steal.
•    His previous career high in rebounds was seven which he did multiple times.

FRESHMEN SOLID IN DEBUTS:
•     A pair of CSU freshmen – Tyree Appleby and Stefan Kenic – both had solid debuts at Akron (Nov. 11).
•    Both players were signed in the late signing period in April by head coach Dennis Felton and his staff.
•    Appleby scored a team-best 13 points, adding three rebounds and two steals.
•    Kenic finished with nine points, three rebounds, two blocks and two steals.

FELTON BEGINS TENURE AT CSU:
•     Head coach Dennis Felton made his CSU regular season debut on Saturday night at Akron.
•    Felton was named the 15th head coach in program history on March 24, 2017.
•    Felton is a coaching veteran with more than 30 years of experience, including 10 full seasons as a head coach.
•    During his time on the sidelines Felton has amassed 184 victories, won seven conference championships and led six of his teams to the postseason, including four NCAA berths.

KASH IS MONEY:
•     Kasheem Thomas has started all 33 games in his CSU career.
•    He started all 31 games as a freshman last year, the most starts for a first year player in program history.
•    Thomas has started both games this season.
•    Thomas averged 7.7 points, 2.7 rebounds and 3.3 assists (9th in HL) last year, ranking third in the Horizon League in assist-to-turnover ratio (2.1) with 102 assists and 49 turnovers.
•    He had seven games with at least six assists.

WORD UP:
•     Senior Bobby Word is the top returning scorer from last season as he averaged 11.1 points per game.
•    Word also ranked seventh in the Horizon League with 2.1 three-pointers per game.
•    He made at least four three’s in nine games last season.

FOR THREE:
•    CSU has hit a three-pointer in a school record 599 consecutive games.
•    The Vikings have hit at least three three’s in 148 straight contests, extending the streak with three trifectas at Rutgers on Tuesday night.
•    The last time CSU failed to make a three-pointer was Feb. 21, 1998, when the Vikings were 0-for-8 in a 60-57 win over Detroit.

WILLIAMS & JOHNSON SIGN WITH CSU:
•    Detroit, Mich., natives Rashad Williams and Deante “Spider” Johnson have signed National Letters of Intent to attend CSU beginning in the fall of 2018.
•    A 6-foot-3 point guard, Wiliams averaged 24.0 points, 4.2 rebounds and 6.7 assists at Wayne Memorial HS last year.
•    He was the first player from Wayne Memorial to earn Associated Press first team all-state honors in 20 years, leading team to the district finals.
•    Williams led the team to its first KLAA championship, knocking down 78 three-pointers last year as the squad went 19-4.
•    The 6-foot-9 Johnson was named to the Class C all-state team and was selected as the Class C Defensive Player of the Year in Michigan.
•    He led the school to its first regional championship and appearance in the state semifinals, posting 17 points, nine rebounds and four assists in the state semifinal contest.
•    One of the top defensive players in the State of Michigan with a 7-foot wingspan, Johnson averaged 16.0 points, 8.0 rebounds and 3.5 blocked shots, while shooting 68-percent from the field last year.

UP NEXT:
•    The Vikings continue play in the Showcase on the Banks Classic with a 7:00 pm contest at ECU on Monday (Nov. 20).
•    CSU closes play in the event on Friday (Nov. 24) when the Vikings host Central Connecticut at 5:00 pm in the Wolstein Center.