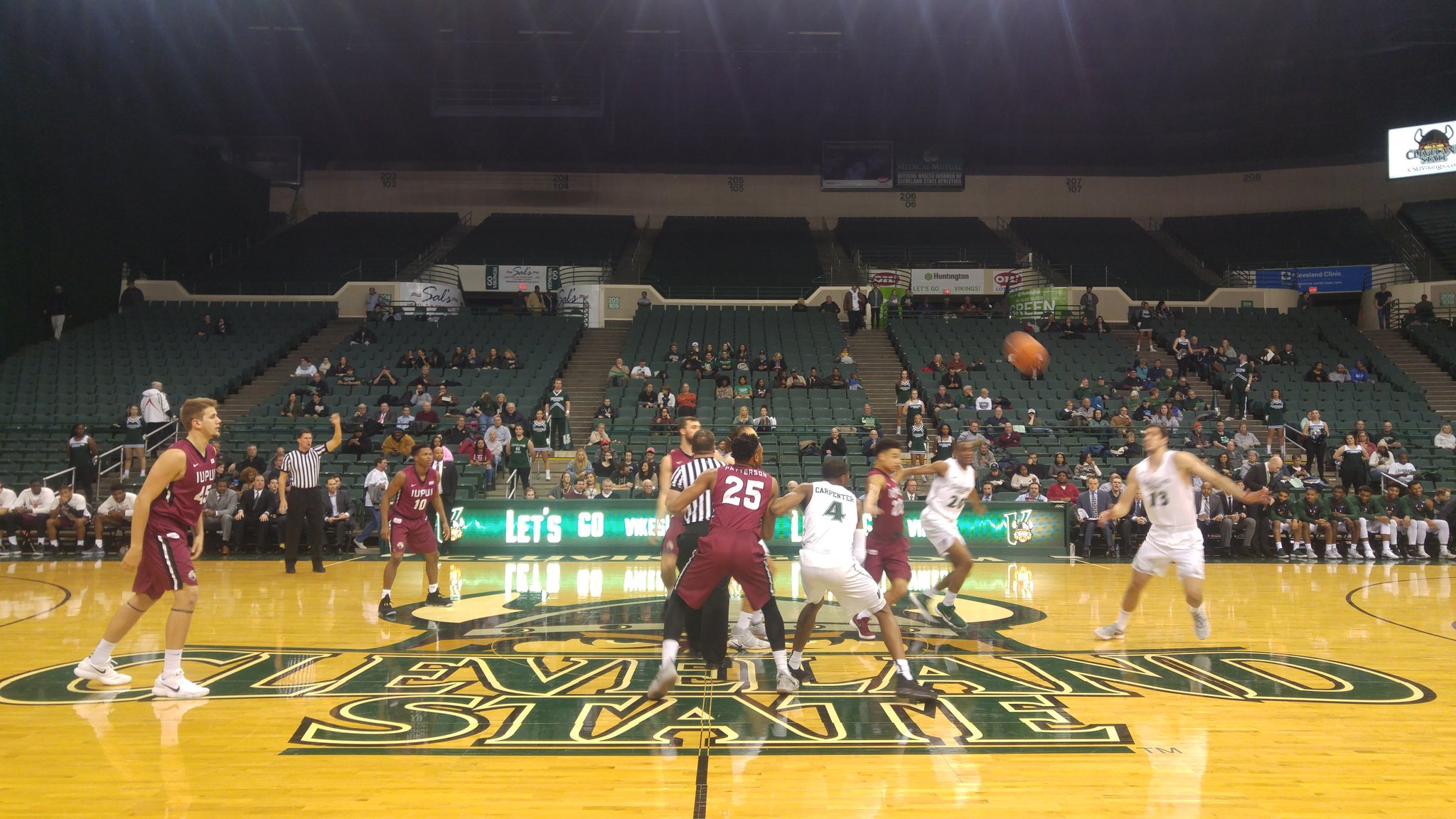 GAME PREVIEW:
• Cleveland State hits the road to take on Ohio State on Black Friday, Nov. 23, for an 8:00 pm tip.
• The Vikings (2-3) will be looking to regroup after dropping a 73-60 decision to Samford to end their recent homestand.
• Ohio State is 5-0 with wins over Cincinnati, Purdue Fort Wayne, Creighton, South Carolina State and Samford.
• The Buckeyes are ranked among the top 25 nationally in both major polls.
• Friday will be the third game in the Buckeye Basketball Classic for CSU and the fourth and final contest for Ohio State.
• The game will be broadcast live on AM 1420 with Al Pawlowski on the call.
• The game will also be shown on Fox Sports 1 with Dave O’Brien and Stephen Howard on the call.

THE BUCKEYE BASKETBALL CLASSIC:
• This early-season event will feature 10 games played by five teams from Nov. 11-25.
• Seven of the 10 games in the event will take place in Ohio.
• The event features Cleveland State, Ohio State, Purdue Fort Wayne, Samford and South Carolina State.

GAME 5: SAMFORD 73, CSU 60 (11/23/18):
• CSU had the lead right after the half, but a prolonged cold spell by the Vikings early in the second half allowed Samford to pull away.
• Sophomore Stefan Kenic notched a team-high 15 points, his third straight double-figure scoring game.
• CSU had advantages in fast-break points, second-chance points and bench points but was undone by its shooting.
• Jaalam Hill had a team season-high 10 rebounds as CSU grabbed a higher share of its misses than did the Bulldogs.

NOT OVER THE HILL:
• Junior college transfer Jaalam Hill is shooting 60.0 percent from the floor in the early going (21-for-35).
• Hill had 15 points, on 6-for-7 shooting, and six boards against Kent State for his first double-figure scoring game at CSU.
• His streak of three straight double-figure scoring games was snapped last time out, but he did post a season-best 10 rebounds.
• Hill is averaging 9.6 points and 6.0 rebounds, tops on the team, in 22.6 minutes.

SHARING THE SCORING LOAD:
• In its two wins this season, the Vikings had six players in double-figure scoring in one game and five reach double digits in the other.
• In CSU’s three losses this season, no more than two Vikings reached double figures in scoring.

WE’LL TAKE ‘EM, THEY’RE FREE:
• Cleveland State has taken 128 free throws through five games, a mark that ranked among the top 25 in Division I as of the NCAA’s most recent stats report.
• The Vikings have taken at least 19 free throws in every game and had a season-high 32 vs. Kent State.

SHARING THE WORKLOAD:
• Though CSU has only played five games this season, seven players are averaging between 16.4-23.6 minutes per game.
• Tyree Appleby is the only Viking with a higher average as he leads the team with 28.0 minutes/game.
• The last time Cleveland State had no player average at least 30 minutes per game was in 2005-06 when Carlos English led the squad with 28.4.

BOOST OFF THE BENCH:
• The Vikings’ bench has outscored its opponents in all five games this season.
• CSU has a 156-74 advantage in bench points on the year, an average of over 16 points better per game.
• Jaalam Hill has 48 total points off the bench while Rashad Williams has 47.
• CSU’s bench outscored its opponent in just 14 games last season.

EIGHT MAKE DEBUT:
• Eight of the 12 Vikings to see time this season are playing their first season at CSU.
• Seven of the eight also made their NCAA debut this season, including six true freshmen.
• Seth Millner is the lone true freshman to start a contest this season. He joins sophomore Algevon Eichelberger, a transfer, as the Viking newcomers to start this year.

DETERMINED ON DEFENSE:
• In their first 30 games under head coach Dennis Felton, the Vikings allowed their opponent to shoot 45% or higher on 17 occasions.
• In the last 10 games dating back to last season, CSU has held nine opponents under 45% from the field.
• CSU’s opponents have shot a combined 40.5% in this stretch (255-for-630).

FOR THREE:
• CSU enters Saturday’s game with a school record streak of 637 straight games with a three-pointer.
• The Vikings have hit at least three three’s in 186 straight games.
• The last time CSU failed to make a three-pointer was Feb. 21, 1998, when the Vikings were 0-for-8 in a 60-57 win over Detroit.

FOR THREE, PART TWO
• The Vikings set a single-season school record for three-pointers made (294) and threes attempted (863) in 2017-18, breaking the old records of 247 makes and 709 attempts.
• CSU tied the single-game school record of 14 three pointers made in four different games last year.

FOR THREE, PART THREE
• Cleveland State ranks among the top 50 nationally in three-pointers made and attempted as of the NCAA’s most recent report.
• The Vikings have hit 10+ threes in two games this season and shot over 50% from distance in both of those contests.

A MAGICAL RUN:
• Cleveland State made a magical run to the Horizon League championship game last year, reaching the contest for the first time since 2009.
• The Vikings knocked off ninth-seeded Youngstown State, 72-71, in their opening game of the League Tournament.
• CSU then shocked top-seed Northern Kentucky, 89-80, rallying from a 15-point deficit with 61 second-half points.
• The Vikings then held off fourth-seed Oakland, 44-43, in the semifinals, allowing season lows in points and field goal % (.250).
• CSU’s 61 second-half points against NKU were its most in a half against a DI foe since 1990. The 43 points it allowed to Oakland were the fewest allowed to a DI team since 2012.
• Wright State topped CSU, 74-57, in the title contest, the fourth game in five days for the Vikings.

SERBIAN SUCCESS:
• Stefan Kenic scored 333 points last season, among the top 10 totals all-time among Viking freshmen.
• He led the team in free throw percentage (.791) last season and was second on the team in three-point percentage (.371).
• He tied his career high with 19 points against SCSU (11/18).
• He added 15 points and six rebounds last time out vs. Samford, his third straight double-figure scoring game.
• Kenic made a career-high eight free throws last time out.
• Kenic had a career high four assists in the season opener.
• Kenic is joined on the squad this season by fellow Serbian, Aleksa Popovic.

ODDS & ENDS:
• Cleveland State has committed fewer fouls than its opponent in all five games this season.
• A player on the opposing team has fouled out in four of CSU’s opening five games.
• CSU’s opponent has had exactly 12 turnovers in four of five games. Samford broke the string last time out with 15 turnovers.

LIMITED EXPERIENCE:
• Kasheem Thomas was the only Viking on the roster who had played more than one season for Cleveland State entering the 2018-19 season.
• Thomas has played in all 71 games since his arrival, starting 41 of those contests.
• Dontel Highsmith had played multiple seasons of college basketball and transferred to CSU before the 2017-18 season. Rasheem Dunn played the past two seasons with St. Francis Brooklyn but has to sit out this season due to NCAA transfer rules.

UP NEXT:
• CSU concludes action in the Buckeye Basketball Classic by hosting Purdue Fort Wayne Sunday, Nov. 25, at 5:00 p.m. It will be the first meeting between the teams in over 15 years.