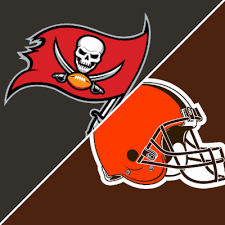 Tampa Bay will be returning from their bye week when they visit Cleveland on Sunday. Prior to their week off the Bucs won two in a row. They sit atop the NFC South (5-5) and have a lot riding on this game.

On the other side of the ball, the Browns (3-7) will be playing their final game with Jacoby Brissett behind center. Deshaun Watson is set to return Week 13 against the Texans.

Cleveland has dealt with a mirage of issues this season. They’ve suffered embarrassing losses and look to get a win prior to Watson’s return. In order to do so they’ll need to beat future hall of famer, Tom Brady.

It’s a tall order. However, it’s not impossible as in football anything can happen. Mostly, the Browns have seen that go against them, but some luck and good execution could sway things their way.

First the Browns have to establish the run game early. Nick Chubb had one of the worst games of his career last week against the Bills. Look for him to bounce back. Tampa Bay is decent against the run; however, I don’t see Chubb replicating back-to-back poor performances…especially at home.

The most important piece to this game will be the defense. They’ve allowed 30 plus points in numerous games and have not played with much intensity. They have to put the pressure on Brady as well as not letting the Bucs’ receivers get behind them for big plays.

Brissett has played exceptionally well while Watson served out his suspension. In fact, he far exceeded many expectations. The 3-7 record doesn’t reflect on what he’s done for the Browns. Thus far he’s thrown for 2,389 yards, 213-331 (64.3%) with 11 touchdowns and five interceptions. He’s given Cleveland a chance to win in each game and that’s what his assignment was.

Brissett spent his rookie season learning from Brady. He told us:

“I was that kid that was annoying as hell and kind of just, wherever he went I tried to follow, the places that I could go, and just trying to get as much information.”

As he faces TB12 on Sunday, look for Brissett to leave it all on the field.

Browns Defense Can’t Get it Together On or Off the Field
Jacoby Brissett, More than “Just a Backup”