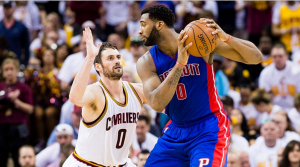 Coming into Monday night’s contest, the Pistons were ninth in the league in 3-pointers made and sixth in 3-point percentage.

They also have the added benefit of Andre Drummond, the league’s leading rebounder, down low.

But from the opening tip, the Cavs came out with the right energy on that side of the court. They did a fantastic job of playing in the passing lanes, communicating, and jamming up the middle of the lane to prevent Drummond from going off.

Detroit shot 44.2 percent from the field and 43.3 percent from behind the arc, with the Cavs winning the rebounding battle 42-34. Drummond scored just eight points and grabbed eight boards, just over half of his 15.8 rebound per game average coming into Monday.

In the second half, Cleveland did not take their foot off the gas, which allowed them to get the starters some rest in the fourth quarter.

“That was 48 minutes of game planning and execution right from the beginning,” James said after the win.