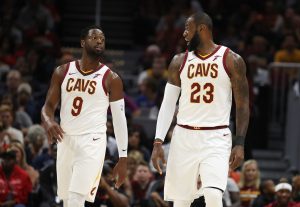 Offensively, the Cavs did just about everything right.

They did a good job of taking their time when it came to their shot selection, running their sets, and choosing good shots. They finished shooting an incredibly efficient 16-of-33 (48.5 percent) from deep and 42-of-80 (52.5 percent) from the field.

That led to them sharing the ball and overall, playing more team-oriented basketball than what we have seen in some of their losing games this season. This movement led to them having 28 team assists, and in the second quarter when they really began to blow the lead open, they assisted on 11 of their 13 made baskets.

The Cavs ended the game with six players in double figures: Kevin Love with 19 points and 11 rebounds, LeBron James with 18 points (16 of which came in the first quarter) and eight assists, Jae Crowder with 18, Jose Calderon with 14, Jeff Green with 11 and Channing Frye with 10. The numbers from Crowder, Calderon and Frye were all season-highs.

All of that led to their largest lead of the year, 39 points, which they held onto at the end of the third frame.