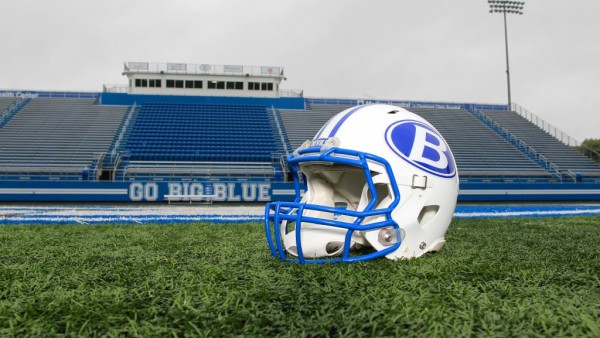 BRUNSWICK, OHIO- Over this past summer, Brunswick Head Coach Mark Pinzone and Strongsville Head Coach Louis Cirino got together and both wanted to make this rivalry game even more meaningful, and they did just that. Both coaches came up with a title for the yearly matchup, along with a trophy that the winner of the game will keep at their school for the next year. The game is now called “The Battle of Boston Road” since it is Boston Road that literally separates the two rival towns.

Both teams came into tonight’s game with identical 5-4 records, however only Brunswick had slight playoff hopes on the line.

Unfortunately for the home team, the visiting Mustangs were hellbent on making sure Brunswick’s season ended tonight and it was evident from the beginning that it indeed would be.

The first quarter was the Jony Major show as the Mustangs scored 28 points and all were either scored by Major or he had a hand in the score by tossing touchdown pass.  Major started the scoring with a 35 yard burst virtually untouched and then contributed three touchdown passes (64, 28 and 81 yards each)

The Mustangs slowed down their pace a bit in the second quarter knowing they had a 28 point lead. But just because they weren’t hitting big passes for scores doesn’t mean Strongsville’s offense was done for the evening. Taylor Griffin ran one in for a score and Joe Gillette added his third score of the night to bring the halftime score to 41-0 after a bad snap on an extra point attempt.

For Brunswick, it was a night of below average defense and timely offensive turnovers. Quarterback Cole Zamiska fumbled once and threw an interception, while star player Ethan Flanigan also fumbled the ball away. Against a team like Strongsville who can score at any moment, you just cannot turn the ball over that many times and expect nothing less than what happened tonight.

The newly made “Battle of Boston Road” Trophy will now reside for the next year in the trophy case in Strongsville High School as the visitors definitely deserved it.

Give credit though to the home team Blue Devils as it would have been easy to give up knowing you are down by so much and knowing it is your last game. But that is exactly why they didn’t give up and kept fighting despite the score.  On the Blue Devils, there were a good number of seniors who did not want to go out this way, and kept grinding until the final whistle.

After the game, the Blue Devils’ Ethan Flanigan summed up the season for me: “I’m extremely proud because all season long we always stuck together no matter what and we reached our main goal of improving the program.”

Strongsville upped their record with the win to 6-4 (4-3 in the GCC), and Brunswick fell to 5-5 (3-4 in the GCC). Both teams deserve credit for a good year despite neither making the playoffs. The Greater Cleveland Conference is no joke, especially this year with Euclid and Mentor both playing amazing football and going to the state playoffs.