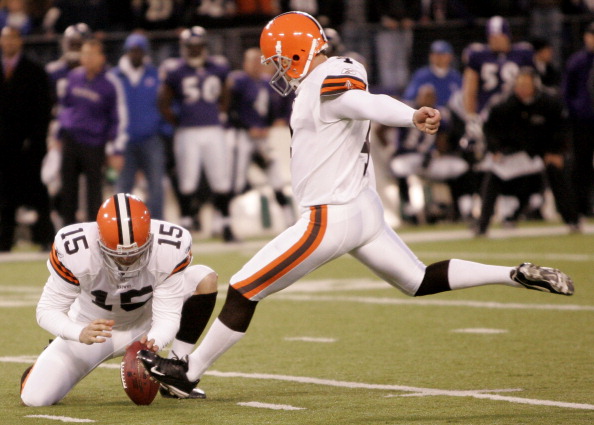 The Browns forced overtime when they tied the game, 30-30, on Phil Dawson’s 51-yard field goal on the final play of the fourth quarter.

The kick was originally called no good, after the football hit the left upright and then appeared to carom off the crossbar before falling into the end zone. Players from both teams left the field, but several Browns stayed to claim that — after the ball had hit the upright — it bounced onto and then off the curved support extending from the crossbar. Thus, they said, the ball had gone through the uprights. The officials discussed the play and agreed with the Browns’ contention, changing their call to a made field goal.

Safety Brodney Pool’s 100-yard touchdown return of an intercepted Kyle Boller pass had given the Browns a 27-14 lead entering the fourth quarter. Baltimore, though, rallied to a 30-27 lead on a touchdown and three Matt Stover field goals, the last of them from 46 yards and breaking a 27-27 tie with 26 seconds left. Josh Cribbs then returned the Baltimore kickoff 39 yards to the Cleveland 43 and Derek Anderson connected with wide receiver Braylon Edwards on the last play before Dawson’s game-tying boot.

The Browns became 6-4 with the win. They would finish 10-6, which remains their best win-loss record since their return as an NFL franchise in 1999. Cleveland missed the postseason, though, matching Tennessee’s record, but losing a tiebreaker to the Titans for a wild card playoff berth. Baltimore dropped to 4-6 and finished 5-11.