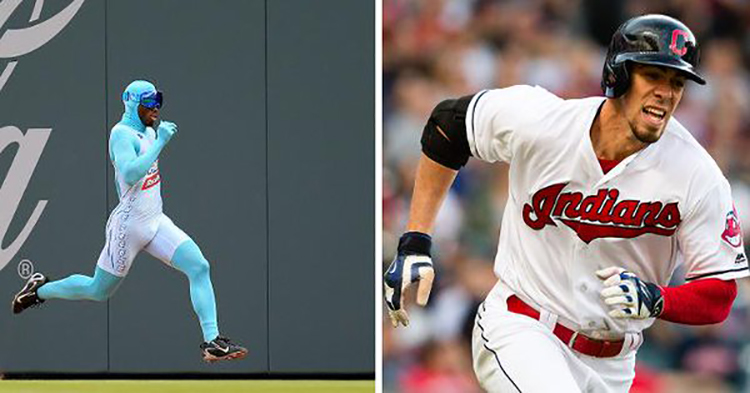 The race is on after the Twitter beef developed over the past couple of days. The challenge was met by The Freeze and Zimmer accepted saying, “Let get it on!”

We have all seen how fast the Indians Center Fielder, Bradley Zimmer is in his gazelle-like strides around the base paths at baseball parks around the league. He turns those routine singles into doubles on the regular and scores from first with time to spare. When it comes to chasing down a ball in the outfield… runners don’t have a chance with the combination of his speed and a rocket arm that tracks runners down from the outfield.

Bradley Zimmer can beat The Freeze w/o a head start.

Robo doubles and Zim shows off his wheels — 1-0! pic.twitter.com/Q5l0We5dCa

If you’re not familiar, there is a mascot in Atlanta called The Freeze that gives challengers a five-second head start as they race from the left field foul line to the right field foul line on the warning track, only to catch up to them with the speed of a cheetah to pass most runners by the center field distance marker on the wall.

This won’t be your normal, run of the mill hot dog, ketchup, mustard and onion race at the ball park and I’m sure we’re all curious who will walk away victorious, but the real winners will be the fans that get to see this race happen when and if it does. We here at NEOSI have our money on Zimmer with and without a head start. You don’t have to prove anything to us, Bradley, we know your fast as lightning and the competition will look FROZEN.

Streaking Indians Roll Past Orioles 6-3 to Wrap Up Road Trip 7-1; Three Takeaways From the Win
Bauer Roughed Up In Second Inning, Three Takeaways from Indians 5-0 Defeat