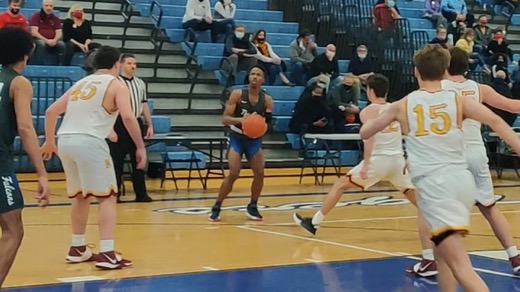 Against Cardinal Mooney in the Division III, Region 9 semi-final, the experience mismatch showed as they strolled through the Cardinals with a 74-31 win to advance to the regional finals.

“You can predict whatever you want to predict. You can watch film. You could have a better team. But guys that have confidence, guys that don’t get nervous, guys that understand the moment, they are the guys that will probably have a better shot in these kinds of games.”

Cardinal Mooney reached their first regional final for the first time since 2014, began the game with a slow pace. The Falcons’ answer: speed them up.

Despite the slow-paced first quarter. Lutheran East still managed to get a 9-4 lead at the end.

“They tried to take time off the clock. Slow the game down and keep it in the 50s or lower… We had to stay the course and do what we do. Pressure the ball, push the tempo; play fast. We were able to do that.”

In doing that, Lutheran East’s defense began to take over and produce on the offensive end in the second quarter.

“The whole season we have been feeding off our defensive,” Falcons’ Senior Jalen Knott said.

“Our defensive energy will lead to our offense. When that happens, I feel like no one can beat us.”

Leading scorers in the first half.

The Falcons outscored the Cardinals 25-5 in the second quarter. Players like Knott and Jared Lary took over, combining for 17 of the teams 25 second quarter points.

Knott concluded the first half with a deep three off an assist from Georgetown recruit Jay Billingsley.

Jalen Knott closes the half with a 3-pointer!

The Cardinal’s offense started to find their offensive stride in the third quarter, but their height disadvantage made life in the paint hard against the larger Falcons squad.

“We are going to the (team’s size) as much as we can to our advantage,” Knott said.

“There are no rules in basketball other than no fouls and no going out of bounds. So, we are going to use it as much as we can.”

Last year, Lutheran East was on their way to make a run in the Division II state tournament before the Covid-19 pandemic shut down the season, ruining their chances. This years’ team doesn’t plan on taking this season for granted.

Cardinals’ Senior Mike Pelini finished with 19 points. He finished his Cardinal Mooney’s basketball career as the seventh all-time leading scorer. He was two points shy of surpassing his uncle Bo Pelini on the list.

Lutheran East record goes to 13-3 after their win and will advance to the Division III, Regional final where they will be matchup against Norwayne after they defeated Springfield 55-49.