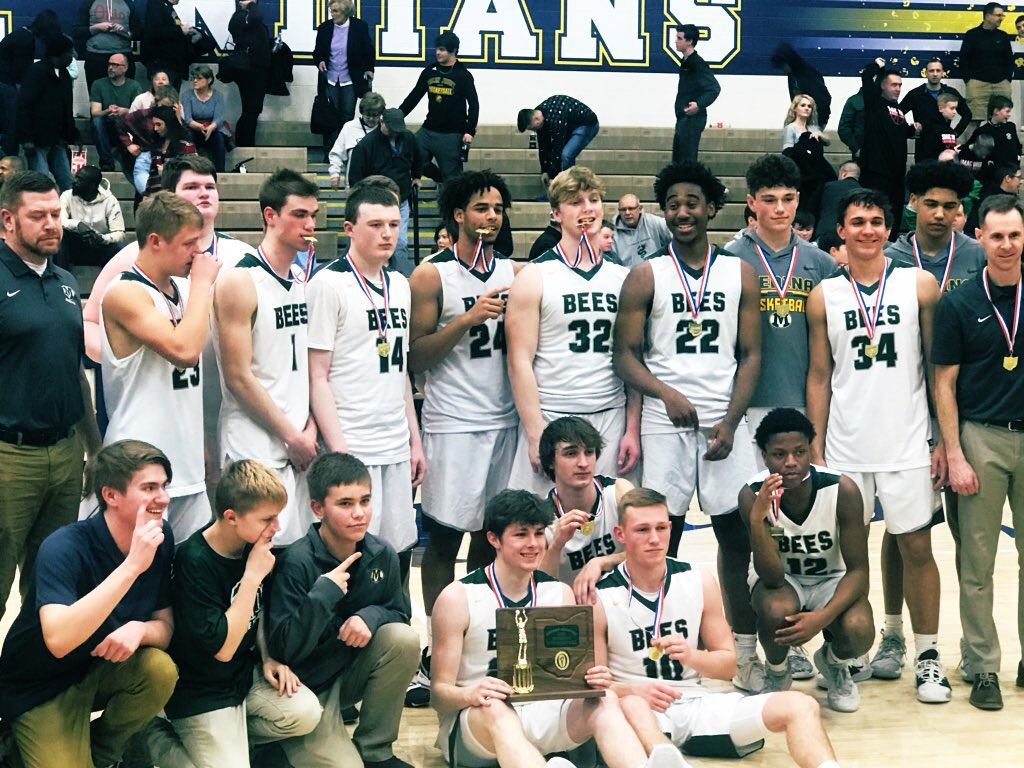 COPLEY, OHIO – This postseason, Medina has been playing like the saying is “thrive and advance” rather than “survive and advanced”.

The Battling Bees used a swarming defensive effort to hold Walsh Jesuit to a season low in points, beating the Warriors by a final score of 53-36 on Saturday night.

By both teams’ standards, this was a very low scoring game. Medina swayed the momentum in their favor early, going on a 9-0 run to take a 9-3 lead halfway through the first quarter.

Back-to-back steals from Jack Hagan fuel a 9-0 run for Medina. They lead Walsh Jesuit 9-3 with 4:18 in the 1st.@medinaathletics @WJ_Warriors pic.twitter.com/voY0daO566

Walsh responded with what ended up being on of their best offensive stretches of the game. The Warriors went on an 8-2 run to tie the game, before Doug Sartain connected on a buzzer beater to give Medina a 14-11 lead.

Walsh finished the game with 11 turnovers, six of which were forced in the opening quarter.

In the second, Medina pieced together one of their most dominant defensive quarters of the season.

They only allowed four points in the frame, as they crept out to a 25-15 halftime lead.

In the first half, Walsh only shot 28% from the field compared to Medina’s 46%. Great perimeter defense and a quality performance in the paint from Christian Howard-Caffey fueled the Bees to the double digit lead at halftime.

Walsh showed their defensive prowess in the third quarter, cutting the lead to 27-24 with 4:21 in the frame. Erik Stern scored or assisted on all of his Warriors’ points during the 9-2 run.

6 points and a perfect assist from Erik Stern has cut the Medina lead to 27-24 with 4:21 in the 3rd. @medinaathletics @WJ_Warriors pic.twitter.com/enRpcYSPxm

However, that is as close as Walsh would get for the rest of the game.

Medina exploded for a 12-1 run to end the frame, building their largest lead of the game at 39-25. Kyle Szumski, the senior leader of this Bees team, connected on a pair of three pointers during the run.

Maison Ross tried his best to keep the Warriors’ season alive, but his team high 17 points just was not enough to overcome the lack of production from the rest of his team.

Medina continued to smother the Walsh offense, once again holding them to just 11 points in the fourth quarter.

Medina’s defense has been smothering Walsh all night long. Bees up 47-31 with 2:30 in regulation.@medinaathletics @WJ_Warriors pic.twitter.com/umEXdkcOKd

The Bees would bring in their bench late in the game, as they secured the 53-36 victory and a district title.

Medina improves to 20-5 with Saturday night’s victory. It’s the first 20 win season for the Battling Bees since Kenny Kaminski’s sophomore year in 2010. Additionally, it is the first district title for them since 2017.

On Wednesday, Medina will travel to the Wolstein Center in Cleveland to square off with GCC rival Mentor at 8:00 pm.

Expecting an absolute battle, as these teams have split the season series. Their most recent game ended in a Mentor victory on a Luke Chicone buzzer beater.

It’s March Madness season in Northeast Ohio, and it looks like Medina may be in it to win it.