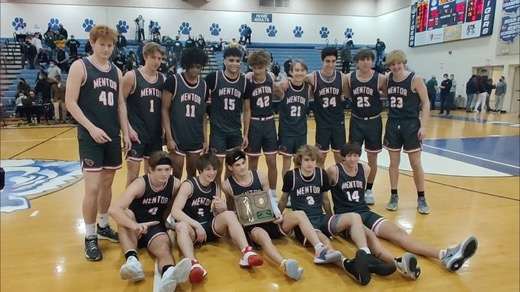 There was only room for one team to make the trip to Dayton for a state championship.

Second place Medina and conference champs Mentor faced off for round 3 for all the marbles in the Division I, Region 2 final, in which the Cardinals defeated the Bees 65-55 to advance to the state semi-final.

“I thought that we have been prepared all year, especially this week,” Cardinals’ coach Bob Krizancic said after the win. “The mentality and the basketball IQ were really ski-high.”

Thanks to Mentor defense, they were able to control a large part of the game. They played around the strategy of shutting down the surrounding players around Medina’s guard Corey Tripp.

“I felt really good about it. We were so worried about Geschke getting hot, Howard getting a lot of points in the paint, and some of their shooters getting hot. I just think that defense was a huge key to get us that lead. “

The only players with double-digit points for Medina were Tripp (26) and Christian Howard (12), who scored in the paint.

On both sides of the court, Jonah Waag was the Cardinals’ leading scorer with 19 points and rebounder with 7. He also contributed with 2 steals.

“I like to do the little things,” Waag said.

Mentor capitalized off their second chance to convert them into points. The way their roster is structured allowed them to have all five players on the 3-point line, pulling Bees’ big man Howard away from the basket.

The Cardinals snagged 8 offensive rebounds. But the plan does not work if the stretch 5 do not shoot threes. Mentor made sure they took those opportunities.

“(Using a stretch-5) is huge for us. Against (Massillon) Jackson [in the regional semi-final], we noticed that their big buy was sitting in the paint waiting for our guards. We’ve been telling our guards all week that if their bigs give you an opportunity to shoot it, you shoot it.”

The Cardinal had the lead for almost the entire game. After Tripp split his free-throws to make it 5-5 in the first quarter, Kyle Culler made back-to-back threes to have the Cardinals lead by 6. They entered the second quarter with a 18-12 lead.

Mentor’s defense kicked into gear in the second quarter by having Medina shott 2-of-8 from the field.

Chicone sparked the Cardinals’ offense by scoring the first two baskets to open the quarter; opening opportunities for his teammates to help extend their lead to 32-19 at halftime.

In the second half, Mentor produced a lot of their points at the free-throw line, shooting 20-of 29 from the charity stripe.

Cardinals’ guard and Youngstown State recruit Chicone finishes the game with 1,499 career points, one shy of 1,500.

Medina completes their season with a 18-7, 7-3 record, second in the conference. Their campaign marked the third time in their program’s history to appear in the Elite 8.

Mentor advances to the Division I, State semi-final where they will take on the winner of Archbishop Moeller and Centerville on March 20th.