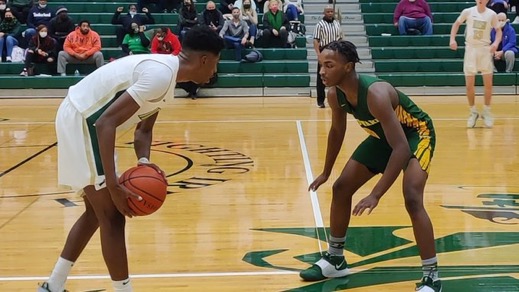 With the OHSAA State tournament around the corner, the St. Vincent-St. Mary Fighting Irish are looking to play their best basketball.

Against the No. 1 ranked team in the Division I, AP poll. The Fighting Irish ran away with a 88-58 win over the St. Edward Eagles at home, winning their fifth game in a row.

“I feel like we played our best game all year, Fighting Irish coach Dru Joyce said.

According to coach Joyce, St. Vincent-St. Mary (15-2) had trouble putting teams away in the second half after gaining a big lead in the first this season.

“Tonight, we executed,” he said.

St. Vincent-St. Mary had 22 assists on the night against St. Edward (12-3). Coach Joyce described the offense as “poetry.”

“We shared the ball. We had 11 assists in the first half. So, when you share the ball like that, good things happen. It was poetry,” he said.

Leading the offense was Senior Malaki Branham, who finished with 22 points, while shooting 80 percent from the field, 7 rebounds and 2 steals.

“We were really not settling [for bad shots. We were] getting to the rim,” Branham said.

“Coach Dru (Joyce) said we really don’t have to shoot a lot of jump shots. Get to the rim, draw fouls, and get to the free-throw line. That’s what we did today.”

The Fighting Irish scored 30 points in the paint and 24 off turnovers.

Right behind Branham in scoring was Ramar Pryor, who scored 18 points off the bench for the Fighting Irish.

St. Vincent-St. Mary forced 14 Eagles’ turnovers. Five of those came off steals from Junior Sencire Harris, who also logged in 12 points and a team-leading 8 assists.

The Fighting Irish were at their brightest. However, the third quarter presented a moment to slightly dim the mood as Eagles Junior Michael Bova committed a foul on Fighting Irish Senior Dalen Burney, which resulted in a verbal altercation after the play leading to a technical foul on Burney.

“Honestly, it was an intentional foul,” coach Joyce describes the incident.

“They threw (Burney) to the floor. He jumped up and he cursed (and got the technical foul). But, he understood that he held his emotions in check. Other than cursing, he wasn’t going to fight. That’s one of those fouls that could cause a fight, because Bova just threw him to the floor.”

After the game, Branham feels good about the win, but knows there’s more work that has to be done before the tournament arrives.

“[This win] boosts our confidence a lot,” he said.

“But, we still have a lot of work to do before the tournament. We have three tough games ahead of us. It’s a work in progress, but we did really good today so we just have to keep it up.”

St. Edward drops their second of their last three games, the last being against their rival St. Ignatius and a grueling week that might have been their toughest all year.

Despite the loss, they will host Centerville on Saturday, Feb. 13. St. Vincent-St. Mary will also play a home game on the 13th as they host Brush.