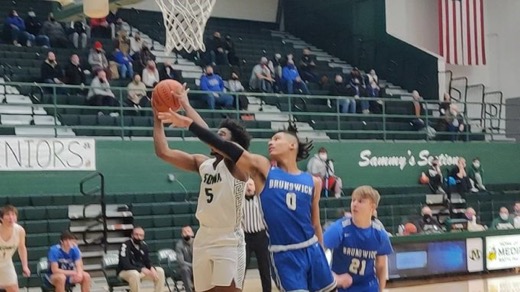 Medina’s offense ran like a well-oiled machine against the Blue Devils.

With only five turnovers, 21 team assists and lockdown defense in the second quarter, they came out of the Bee Hive with an 82-70 win over their Brunswick rivals.

“We’ve been preaching to play like this the whole season,” Corey Tripp said.

“I feel now when guys see that we can play like this and see how big of a threat we are. I believe we can compete with any team when playing this style for sure.”

“(Tripp) is one of the best players in Ohio,” Medina’s coach Chris Hassinger said.

“What I liked from tonight, is that he got other guys involved early in the game. He hit Bryce Beech for three and hit Jujuan for a couple. That just makes us that much better.”

Tripp’s highlight play of the game happened in the third quarter with a windmill dunk in transition that erupted the socially distanced home crowd and bench.

After scoring the teams first eight points, he started to dish the ball. The energy was infectious to the entire team. Bee’s forward Christian Howard got going, scoring Medina’s next eight points.

“I know that these guys look at me as their leader and I feed off their energy too,” Tripp said.

“So, when I see them cheering me on and getting hype for me. It makes me go and get them involved also, because I want to see them do great too.”

Howard finished making nine of his 11 field goals for 19 points and eight rebounds.

Medina’s defense was at their best in the second quarter, conceding eight points to Brunswick.

“Probably my [and the team’s] worst defensive performance ever (since) I’ve played at Medina was when we played at Brunswick [earlier in the season,]” Tripp said.

“We locked in and focused in on our defense all year and we are getting better each game.”

Three minutes into the second quarter was also the first time Medina turned the ball over. It was instrumental in their 14-0 run to have a 38-22 halftime lead.

To close out the game Junior Jujuan Jackson, the player who hit the game winner in Brunswick earlier in the season made three three-pointers in the fourth quarter as Brunswick tried to make a comeback.

Jackson made five of his six three-point attempts of the night for 17 points and grabbed four rebounds.

Brunswick’s attempt to come back with a 10-0 run in the third quarter. Cameron Cruz (15 points) made three three-pointers in the quarter.

The Blue Devils will have two more road games to finish out their season. It starts with a conference game at Euclid on Friday, Feb. 12. Medina will host Columbia on Saturday, Feb. 13.