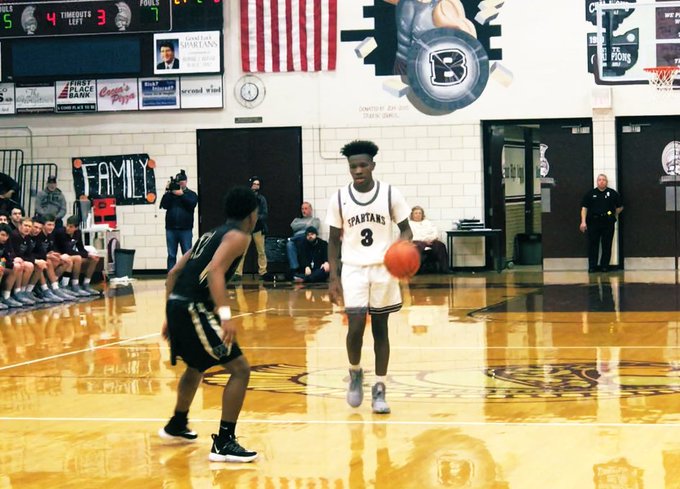 BOARDMAN, OHIO – From the opening tipoff, Harding appeared to be ready to compete with Boardman on the road.

However for the eleventh time this season, the Spartans walked off the floor with a victory, this one a 61-42 triumph over the Raiders.

Harding’s senior guard Munch Owens was impressive early on, scoring a quick six points while propelling his team to an early 11-5 lead.

Munch Owens has Warren Harding out to an 11-5 lead over Boardman halfway through the first quarter. @BoardmanHoops @wgh_athletics @Malutic_Live pic.twitter.com/6eWJdTiSW4

Owens and the rest of the offense would hit a rough patch during the first quarter, a stretch that would really continue for most of the contest.

Boardman battled back to tie the game 13-13 heading into the second quarter before they really played to their potential.

Derrick Anderson, who came into the game averaging a team high 21.6 points per game, led the first half charge for Boardman. The senior scored 14 points in 16 minutes,as the Spartans outscored Harding 18-5 in the frame to take a 31-18 lead into halftime.

The lead would continue to swell, as sloppy play from Harding would lead to several quick and easy buckets. Anderson continued to display his driving ability, as his solid performance continued with the help of Tommy Fryda and Charlie Davis.

Boardman guard Derrick Anderson has been shredding this Harding defense all night. He has 16 of the Spartans’ 33 points so far. pic.twitter.com/ZS0MdCDmca

Fryda, a senior, finished the game with 13 points and a plethora of assists. Davis also knocked down a pair of demoralizing corner three pointers, as Boardman led 46-30 heading into the final frame.

“Tommy Dimes” (The best on-the-spot name I could come up with) with a beautiful dish over the double team 💵 pic.twitter.com/R4nAj5pRv4

Owens and Nutty Burgess would try to climb back into the contest, but their efforts were not enough to overcome the sloppy play and cold shooting

With the reserves on the floor, Boardman would hold the ball to earn a 61-42 victory.

It was a monumental victory on Tuesday night for the Spartans, as they played just two days after their first loss of the season to Green.

Boardman is now in the driver’s seat for an All-American Red Conference title, but they have bigger aspirations for this season outside of the Youngstown area.

The Spartans improve to 11-1, and are next in action on Friday when they host Youngstown East (3-11).

Warren Harding (10-6) will look for a bounce back win of their own when they visit Canfield (6-6) this Friday.