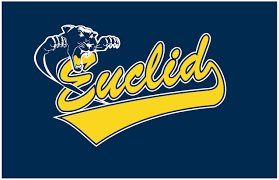 EUCLID, OHIO–  Euclid nearly ran out of gas at the end, but had just enough in the tank to hold off Nordonia 59-58 on Wednesday night. The Panthers, with a 13-10 record, advance to the OHSAA Division I sectional final vs. the Solon District’s No. 1 seed Garfield Heights on Sunday afternoon. Nordonia’s season ends at 10-13.

Three quick baskets by Nordonia senior guard Drew Petros pushed the Knights out to a 14-13 lead after one quarter. Euclid was trying to move the ball around to take advantage of their balanced scoring attack, but turned the ball over seven times in the first period.

Turnovers continued to dog the Panthers in quarter two, but Euclid senior guard Will Saunders was not discouraged. Just 30 seconds into the period, he connected on a 3-pointer giving the Panthers a 16-14 lead. On Euclid’s next trip down court, he scored on a clean putback. At the 4:40 mark of the second quarter, Saunders scored again giving Euclid its largest lead of the game at 26-16.

Nordonia bounced back behind some good shooting from junior guard Evan Wiehe. His final basket of the half was a 3-pointer (following a steal) with 0:35 remaining on the clock. That shot narrowed the Knights’ halftime deficit to 32-29.

The third quarter featured some great shots by both squads, but neither side could get a decisive edge. Finally, Euclid sophomore guard Garvin Clarke stole the ball and drove for a layup with just ten seconds to play in the quarter, and the Panthers pulled out to a 51-44 lead heading to the final period.

But the Knights weren’t finished yet. Senior center Ben Broscheid scored three baskets in a row, and junior guard Gabe Byrd followed up with two of his own. After Byrd’s second shot, Nordonia was within one point at 57-56.

Euclid’s Clarke and Nordonia’s Wiehe traded baskets with approximately two minutes to play, pushing the score out to 59-58. Both teams had chances to score at the end, but neither could tally again. The Knights had the game’s final shot for the win, but it was short of the goal and safely rebounded by Euclid’s Reggie Priah as the final buzzer sounded.

Euclid’s Saunders was the game’s leading scorer with 17. Clarke finished with 10 points as did junior forward Mario Lacy. The Panthers led in rebounding by a 34-28 count, with Lacy and Saunders each gathering seven boards.