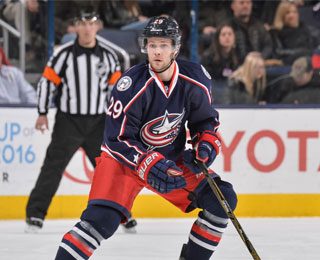 CLEVELAND – The AHL’s defending Calder Cup Champions, the Cleveland Monsters, announced Friday that the NHL’s Columbus Blue Jackets assigned veteran defenseman Cody Goloubef to the Monsters. Selected by the Blue Jackets in the second round (37th overall) of the 2008 NHL Entry Draft, Goloubef, 26, posted 1-7-8 with 20 penalty minutes and a -3 rating in 43 appearances for Columbus last season.

Former second-round pick appeared in 96 games for Columbus from 2011-16.

Prior to his professional career, Goloubef notched 12-25-37 with 140 penalty minutes and a +19 rating in 118 combined NCAA appearances for the University of Wisconsin spanning three seasons from 2007-10. Goloubef also represented Team Canada in the 2009 IIHF U20 World Junior Championships, supplying 0-1-1 with eight penalty minutes and a +10 rating in six appearances.

Next up for the Monsters, it’s a Saturday road clash vs. their Central Division rivals, the Grand Rapids Griffins, with full coverage stay tuned to neosportsinsiders.com and follow us on Twitter @neosportsinside and me @NEOSI_Sprouse for up-to-the-minute updates and the best that Cleveland Sports has to offer.