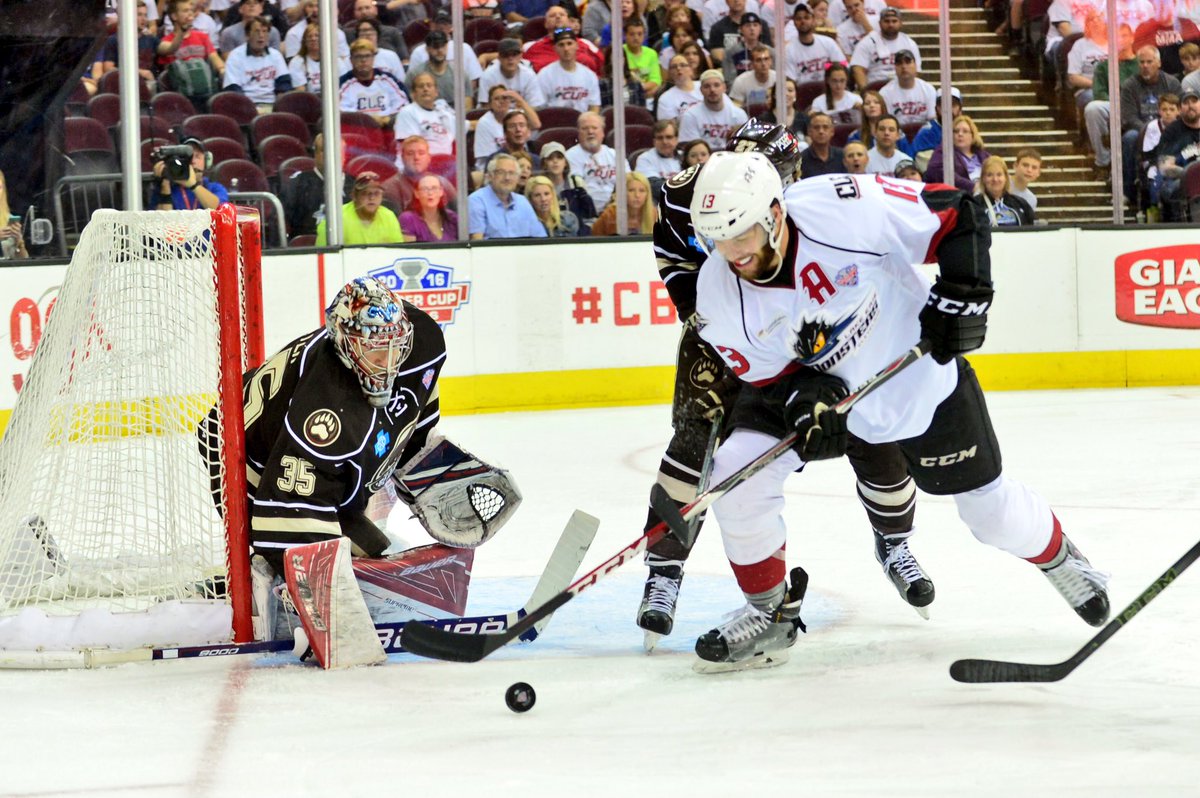 The Lake Erie Monsters’ magical postseason run continued with a spectacular Game 3 at Quicken Loans Arena, in which a record-setting 12,935 fans filled the house to watch Oliver Bjorkstrand score a game-winner in overtime to give the Monsters a 3-2 victory over the Hershey Bears.

The Lake Erie Monsters came into action looking to take a 3-0 series lead over the Bears in their first home game of the Calder Cup Finals. The Bears got the scoring started early, just two minutes into the game as Ryan Stanton took a shot from a pass off the boards through the five hole of Anton Forsberg to put the Bears up 1-0.

Ryan Stanton with his third of the playoffs gets the scoring started for @TheHersheyBears. #CalderCup #HERvsLEhttps://t.co/jCLrDfLa86

The Bears lead did not last for long though as Lukas Sedlak laid out a perfect pass to Bjorkstrand on the two on one for the one timer.

The goal moved Bjorkstrand into sole possession of second on the team in goals scored this postseason with eight. Both teams further had back to back chances halfway through the period as Garrett Mitchell for Hershey and Daniel Zaar for Lake Erie had uncontested shots on goal but both goalies made nice saves. The Monsters found themselves shorthanded with the first penalty of the game later on in the first, but were able to successfully kill the penalty and found themselves on the powerplay to finish the first period. Like Hershey, the Monsters were unable to capitalize and took a 1-1 tie into the second period.

The second period got off to a slow start before the Monsters had the first great opportunity when Kerby Rychel got behind everybody down ice for a wide open slapshot that was denied. The Monsters continued to have several great opportunities throughout the period as Markus Hannikainen had a chance right in front of the net that was mishit and Dillon Heatherington had a wide open one timer after a perfect pass from Brett Gallant.

The Monsters finally caught their break after Alex Broadhurst went down after taking a high stick from Madison Bowey across the face. On the ensuing powerplay, Zaar connected for his seventh goal of the playoffs sneaking one just to the right off the goalie and into the back of the net.

Defensively, Forsberg settled down after allowing the early goal until the one minute mark when Gazley tied things up at two for Hershey. The goal came just 47 seconds following the Monsters go ahead goal.

Gazley ties the game up with less than a minute to go in the second. #CalderCup #HERvsLEhttps://t.co/OhS0mZLjPv

The third period began with a 2-2 tie after both teams scored a goal in each period thus far. Offense was not on the top of the agenda for either team early on as both teams combined for just three shots on goal in the first eight minutes. Around halfway through the period the pace started to pick up. Hershey had a look from in front of the Monsters goal that appeared to deflect off the top of Forsberg’s stick and out of play. The Monsters came down and put several more shots on goal but with nothing to prevail.

Offsides penalties plagued the Monsters throughout the game as they were called for at least three of them which disrupted possible scoring chances. As the five minute mark hit, the Monsters began their final push as star D Zach Weresnki took a slapshot just wide of the net. The Monsters continued to pound it out in front of the net but despite the clutter the horn didn’t ring. Game three would be decided by a sudden-death overtime.

It took the Monsters just 1:20 into overtime to come away victorious. With Sedlak winning the faceoff in the Bears zone, Werenski took a shot from the blue line that after some kind of deflection ended up right in Bjorkstrand’s pocket. He made the most of his opportunity, nailing the game winner for his second goal of the night and his fourth in the last two games.

Here’s what Monsters Head Coach Jared Bednar had to say after the win.

The Monsters need to win one of the next four games to clinch their first ever Calder Cup. It’s been a strong first season for Cleveland hosting the now Blue Jackets affiliate. Game four is set for Saturday June 11th at 7:00 PM at the Q.