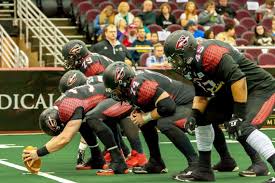 We all know the story about the Cleveland sports drought. 52 years without a major sports championship and with the Cavs getting routed in two games in the finals so far, it looks like the streak will soon be 53 years. The Indians are having their best start to a season in a long time and we are hopeful they’ll still be playing in October, but there’s something happening now that will sadly get overlooked.

It’s been a very successful year for the Lake Erie Monsters. Not only did they officially become the affiliate for the Columbus Blue Jackets but they are in the AHL Calder Cup finals for the first time in the teams history.

They’ve been dominant this postseason losing only TWO out of 16 games and are one away from winning the Calder Cup at home in front of the Monster faithful. History has show that Cleveland has supported hockey as much as any sport in the city even when they had the Barons in the late 70’s and the Lumberjacks in the early 90’s.

Another team that plays at Quicken Loans arena is the Cleveland Gladiators and they’ve had their share of success as well the past few years. The team itself started off as the Thunderbolts back in 1991 but the Gladiators came to Cleveland in 1997. They’ve had eight total playoff apperences, three divisional championships and one conference championship. In 2014, the Gladiators had their best season in the teams history and one of the best in AFL history.

With a 17-1 regular season record, they went on to have home field advantage all throughout the playoffs and even in the ArenaBowl that they went on to lose. They made the playoffs again in 2015 but lost in the first round to Philadelphia. This year, due to teams leaving and folding, every team in the AFL makes the playoffs so the Gladiators are in by default but still playing decent football.

It’s also worth noting that the Akron RubberDucks have the best record of any team in Minor League Baseball and the Lake County Captains are right near the top of their division.

Theses teams may not get the glory they deserve because they’re not in the majors but there’s no denying that they’re fun to watch and have had success in their respective leagues. They’re also great for families on a budget. They have extremely cheap tickets so there’s no excuse not to see these teams live. Although it’s hard not to get caught up in the Cavs, Browns and Indians madness, try and take a look at these teams. Cleveland’s teams doing amazing things down at the Q and on the diamond.