ANNOUNCEMENT: Player Of The Year Award Named After Matthew Medley 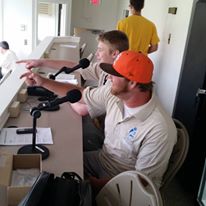 As many of you know, last week the staff of NEOSI lost a great friend, family member and co-worker.  We all saw Matt Medley as more than just a co-worker, we saw him as a friend and brother.  We have found a way to keep his memory burning as his bright future was in the business.

As many of you also know, we have a weekly award at NEOSI for the best player in the set of games we cover each weekend during high school football season.  That weekly award is sponsored by our incredible sponsors at Setta Trophy.

While the weekly award will remain the Setta Trophy Player of the Week Award, we have decided to keep Matt’s memory burning bright along with it.  Going forward, at the end of each season the staff of NEOSI will vote on the best player in the regular season for High School Football and hand out the Matthew Medley Player of the Year Award.

Matthew was very modest, and that is why we want to honor him, amongst other reasons.  He was a driving force behind our High School Sports coverage as well.

Congrats Matt and RIP in Heaven!  We miss you!