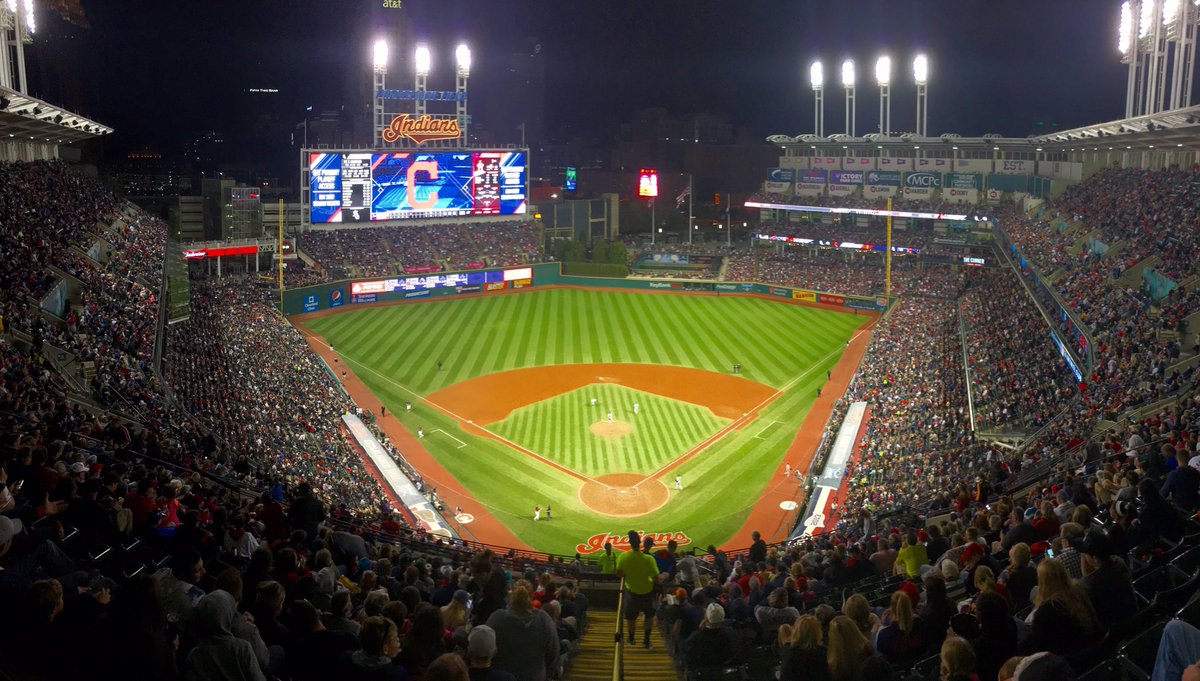 During the top half of the first, Chicago started off the game with a single from Tim Anderson, the following batter was Melky Cabrera. Cabrera doubled to right field that scored Anderson. Jose Abreu singled to right and attempted to advance to second, allowing Cabrera to score. The White Sox started the game with a 2-0 lead.

In the bottom half of the inning, Cleveland’s lead-off batter, Rajai Davis struck out looking. Jason Kipnis got the first hit for the Indians and stole second during Francisco Lindor‘s at bat, Lindor and Mike Napoli drew back to back walks that loaded the bases for Carlos Santana. Santana hit in a double play to end the Indians half of the first inning.

During the top of the 2nd, Carlos Sanchez hit a double to deep left, and advanced to third on a passed ball. Leury Garcia hit a fly ball to center with two outs to end the inning.

During the bottom half of the inning, Jose Ramirez and Brandon Guyer hit back to back singles to start it off. Roberto Perez was up with the bases loaded following a Coco Crisp walk. Perez struck out. Davis hit an RBI single to right field, Crisp was caught between second and third. Davis stole second on the next pitch , Kipnis grounded out to second to end the inning. Indians trailed after two, 2-1.

To start off the third inning, Jeff Manship came on in relief for Anderson. Abreu got a single in the inning but that was it for the White Sox.

During the Indians half of the third, Cleveland went down 1-2-3 .

With two outs in the fourth inning, Manship’s night was done and Kyle Crockett came in. Manship and Crockett combined to strike out the side.

During the Indians half of the 4th, Ramirez started the inning with a ground out to shortstop , Guyer  hit a double and advanced to third on a Sanchez error but was stranded on third to end the fourth.

In the top of the fifth, Perci Garner came on to pitch, relieving Crockett. Sanchez flew out to left field to start the inning. Garcia hit a single to center, Garcia stole second and advanced to third on a throwing error by Perez. Cabrera hit a single that scored Garcia extending the lead to 3-1 for the White Sox. Abreu singled, leaving two on base and two out for Justin Morneau, Morneau grounded out to Lindor.

In the bottom of the Indians half of the inning, they went down 1-2-3.

In the sixth inning, Shawn Armstrong came on. Todd Frazier started off the inning with a solo homer to left field to extend the White Sox lead to 4-1. Sanchez also hit a double in the inning but next batter was Garcia and he struck out to end the inning.

During the bottom half of the sixth, Ramirez got his 45 double on the season but the next batter was Guyer and he lined out to Anderson to end the inning.

Joe Colon came on in the seventh, and struck out the side in order.

In the bottom of the seventh, Tommy Kahnle came on in relief for Quintana. Quintana pitched 6 innings, 6 hits, 1 earned run, 3 walks, and 2 strike outs. With two outs , and Davis on at first , Dan Jennings came on. Kipnis popped up to Alex Avila to end the inning.

Austin Adams came on in the 8th and only lasted a third of an inning. Adams gave up 3 hits, 4 runs, 3 earned runs. Adam Plutko came on to make his Major League debut with one out in the 8th. The White Sox extended their lead to 8-1 in the 8th by scoring 4 times that inning.

During the Indians half of the eighth, Cleveland went down 1-2-3 .

Frazier doubled in the ninth but was left on base to end the ninth inning.

Chris Gimenez came in defensively in the ninth and struck out to start off the bottom of the inning. Guyer got on first following his 31 hit by pitch of the season. Abraham Almonte hit a double advancing Guyer to third. Tyler Naquin and Adam Moore struck out to end the game.

The Cleveland Indians fall to 90-64 on the season , while the Chicago White Sox improve to 73-81 on the season. The Magic Number for the Indians is still at 2 , and they have a chance to clinch tomorrow. Tomorrow at 1:10 PM EST , the Indians will be sending Josh Tomlin out and he will be up against Carlos Rodon. If the Detroit Tigers lose to the Kansas City Royals, and the Indians win, the Indians will clinch.