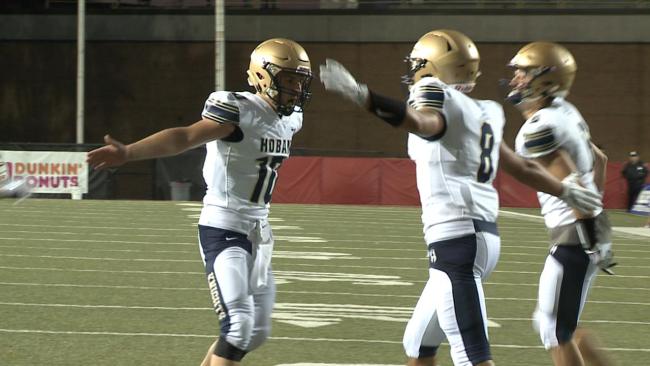 A huge congrats to our week one winner of the 2020 NEOSI HS Football Player of the Week, as Northwest Indians QB Jordan Mick took home the award, walking away with 88 percent of the votes.

Overall the award amassed over 380 votes, and now it’s quickly time to turn the page and start on the award for week two here on NEOSI.

Just like in week one, this past week showed off some great performances from some great players, and this week we celebrate those outings with our 2020 week two edition of the “NEOSI High School Football Player of the Week.”

The Week One 2020 NEOSI HS Football Player of the Week

With that, here are the candidates for this second high school football week as we give you our best with the “NEOSI High School Football Player of the Week” for week one.

Hoban RB Victor Dawson wasn’t in a fun mood when he and the Knights took the field against St.Ed’s on Saturday, and he and his mates made the Eagles pay in a statement game that many didn’t see coming.

The 6-foot, 225 pound star running back pushed past Ed’s for 167 yards on 17 carries and two scores as Hoban sent a message to all the HS contenders in Ohio with a 35-0 win in Lakewood.

“We just had to hit them first,” said Dawson via Cleveland.com. “St. Ed’s is a great team, physically and mentally, so we had to come here and do it right.”

Hoban called it a “statement game,” and Dawson was at the front of the line to make that statement with his and the Knights physical play.

The Mogadore standout is known more for his defense than offense, as last season at linebacker he was the All-NEO defensive player of the year, but this past week in a win over Triway Knight was huge on the ground in the team’s 52-28 win.

The Wildcats running back was a workhorse, as he carried the ball 19 times, rushing for 159 total yards, a healthy 8.3 yards per carry average.

Not only did he put up big numbers on the ground, he scored FIVE of the Wildcats touchdowns on the night in the win.

The Wildcats will host Southeast in a Portage Trail matchup this Friday at home.

The Nordonia quarterback may have woken up with a slightly tired arm Saturday, as in a win Friday 41-40 over Barberton he threw the ball 47 times.

Levak, one of the team captains, completed 29 passes for a whopping 499 yards and four scores in the wild one-point win.

The quarterback also ran for a touchdown in the win.

The 1-1 Knights will be on the road this week for a conference game at Wadsworth Friday night with a kickoff at 7pm.

At 6-2, 195 pounds Wesley is a true “duel threat” at the quarterback spot, as he can take off in a moment’s notice and leave defenders in the dust.

This past week in a win over Hoover 40-28, Wesley was a threat throwing and rushing, as he threw for 18 completions for 217 yards and three scores, and ran for 186 yards and a touchdown in the win.

The future Toledo Rockets QB will continue his senior season Friday as the 2-0 Bulldogs will be on the road at Lake for a Friday matchup kicking off at 7pm.