Top 2 Indians Prospects to Look Out for in the Future 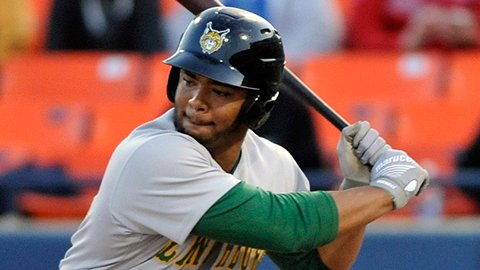 With the MLB Trade Deadline quickly approaching, the Indians are looking to become buyers this time around. When you are a buyer you are looking to gain a big name , while giving up a few prospects. Since it is that time of year, I have been looking into the prospects that the Indians have and which players numbers are impressing me.

2.) Francisco Mejia C
Mejia, 20, has done some big things. This season, Mejia started off with the Lake County Captains and is currently with the Lynchburg Hillcats . Mejia has done something very few people have done in the minors, he has a hitting streak of 39 games. The last time Mejia has not got a hit, it was May 25, the Cleveland Cavaliers had just clinched the series against the Toronto Raptors, and the Cleveland Indians were 25-20 while trailing the Chicago White Sox in the standings. During his tenure with the Captains, Mejia has 7 homers, 51 RBIs, while batting .347 in 60 games. Currently Mejia has played in 15 games with the Hillcats and has 2 homeruns, 15 RBIs, with a .344 average . Francisco Mejia has a very strong arm and in 2015 threw out 32 percent of runners. Mejia has a strong possibility of making his way up to the Indians in 2018, especially if things do not change soon with Yan Gomes. Gomes is signed until 2021 but if things do not change expect the Indians to bite the bullet and do the same thing to him like they did Nick Swisher and Michael Bourn.

1.)  Bobby Bradley
Bradley, 20, has impressed early also. The Left-Handed batting First Baseman is definitely someone to look forward to in the Big Leagues, once he gets there. In 2015, he played most of the season with the Lake County , outside of playing two games with the Lynchburg. In 108 games with the Captains, Bradley had 27 homeruns, 92 RBIs, and a .269 batting average. This year in 93 games so far with the Hillcats he has 19 homers, 77 RBIs, and batting .257 . Unfortunately with power comes occasional strikeouts. In 2015, Bradley had 148 strikeouts and so far in 2016, 123 strikeouts. Bradley looks like someone fans have wanted for a while with the power numbers he provides. With Mike Napoli and Carlos Santana both becoming free agents within the next two years, Bradley can potentially see some time at first or designated hitter in either late 2017 or the 2018 season.

Indians Chatting with Brewers About Lucroy and Smith
The Latest on Lucroy: Not in Brewers Lineup, Trade Talks Have “Intensified”