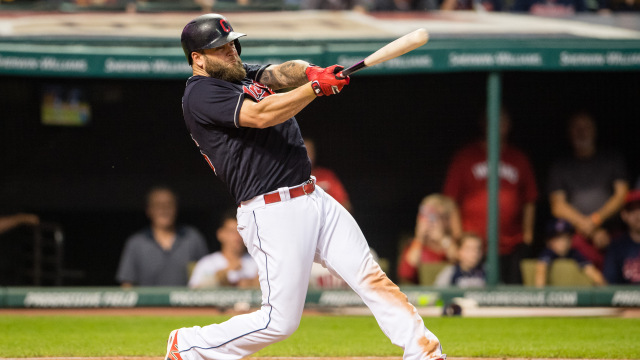 On Tuesday morning news came out that Mike Napoli will once again be with the Cleveland Indians. The Indians signed Napoli to a minor-league contract and will have a spring training invite pending a physical.

The Party At Napoli’s will start once again. Things are a bit different though since the last time Napoli was in an Indians uniform; Carlos Santana was still playing first base, and Edwin Encarnacion was still with Toronto.

I think it is a great idea for the Indians and Mike Napoli to reunite, here are three reasons why.

In his first run with the Cleveland Indians, Mike Napoli emerged as the Clubhouse Leader and also provided veteran leadership throughout the 2016 season. Napoli became the clubhouse leader partly because their usual leader Michael Brantley only played in 11 games during that season.

Napoli brought with him 10 years of MLB experience when he came to Cleveland and also brought along 7 years of playoff experiences. Napoli was someone that was already there when it came to the playoffs and became someone to look up to and for the roster to mold themselves after.

Not many players on the Indians roster in 2016 had a taste of postseason experience yet until that season. The likes of Bryan Shaw, Dan Otero, Coco Crisp, Rajai Davis, Andrew Miller had the most playoff experience outside of the few members that played during the 2013 Wild Card game for the Indians.

For the 2018 Indians season, I expect Napoli to make the team and have a similar role as Jason Giambi did in the 2013 season. Giambi was signed by the Indians in 2013 to a minor league contract, similar situation to Napoli.