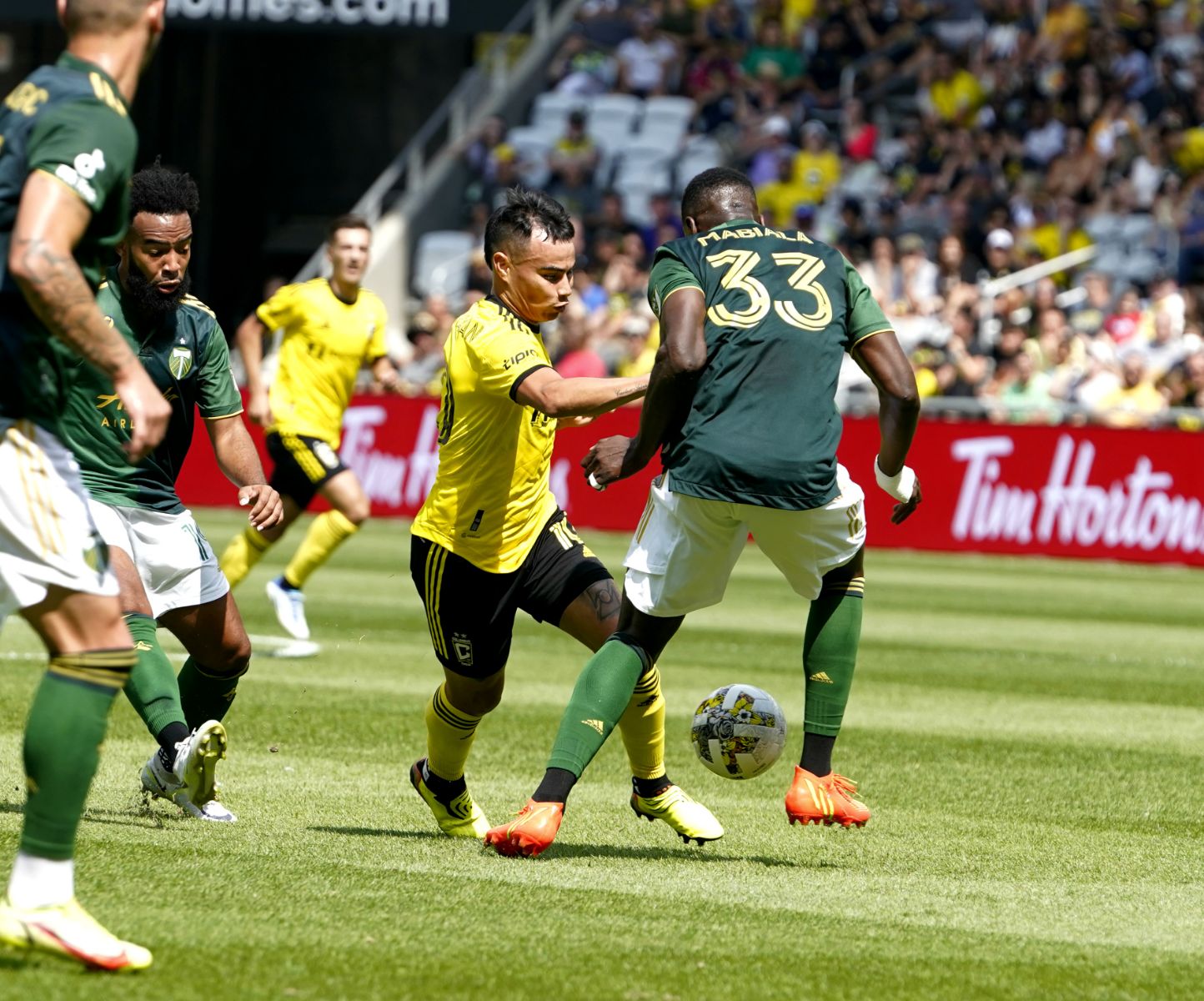 It’s been a tough three games for the Columbus Crew. First, a draw with near bottom-dwelling Chicago. Then a chance to grab three points turned into a late draw in Montreal after another late tying goal. Then, the loss to Miami Wednesday again with a late goal given away.

There is frustration among the team every time a late winner or equalizer hits the back of the net. Coach Caleb Porter even mentioned it this week.

'It's got to change': Frustration mounts for Caleb Porter, Columbus Crew after Miami loss https://t.co/Zj1NsrEXw6

So today’s game with Portland is so important to the club. The Crew cannot allow another late goal for a draw or a tie. The Crew sat 7th in the east prior to kickoff and the Timbers were 6th in the western conference. Both teams needed a win.

So, what to expect on a hot, Sunday afternoon in Columbus at Lower.com field with the game temperature at 81 degrees under a sunny sky?

How about the 15th draw for Columbus? Both teams got a point in a match which saw Portland score an extremely late equalizer in the 95th minute by Santiago Moreno when the Crew couldn’t clear the ball from their defending third. The Crew are still in 7th place with three games remaining and a two point lead for the last playoff spot. Portland moves to 5th with two games remaining.

First Half – All Columbus

Today marks the SIXTH sellout of the regular-season, tying the Club’s all time regular-season record set in 2016.#VamosColumbus | #CLBvPOR pic.twitter.com/JFM21B8UtS

This game was meant to be physical since each team was in need of a W! So early yellow cards to the Crew and Timbers were not surprising.

Cucho Hernandez had a golden opportunity to grab an early lead in the 3rd minute but his attempt sailed high. He had a second in the 33’ on a botched pass by Portland in front of the box, but his shot went low and left of target.

But in the 36th minute, Columbus finally struck first. With the ball on the near touch, Cucho sent it cross pitch to Santos. Pedro’s pass to Lucas Zelarayan was on target. Lucas saw Kevin Molino sneak behind the defense. His back-footed pass to Molino was perfect and the forward from Trinidad knocked it past the Timber goalie to the far post for the first goal!

Special moment for a special player. 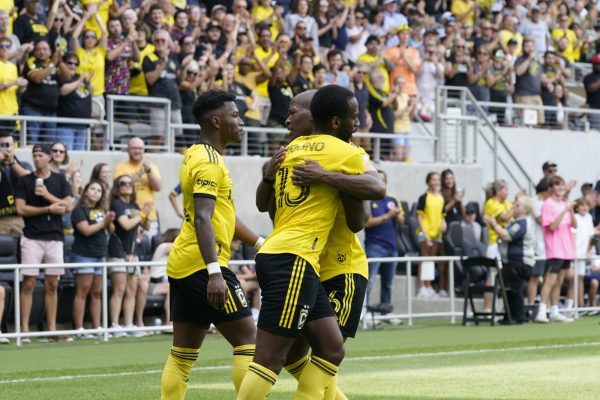 What a goal for a man who has seen more of the training and medical rooms than the pitch since 2020!

Second Half – Another Crew missed chance

Portland started pushing early and in the 53rd minute nearly got the tying goal, but Elroy Room said…not today! In fact, Room had to make quite a few saves in roughly 8 minutes with the one at the 58’ crazy good! Off a Portland corner, a strong header from Diego Chara was heading to Room’s right, but a strong, quick punch cleared the danger.

58' Biiiiig save by Room. Chara gets right in front of the net and Room saves it. #Crew96

By the 81st minute, the Crew were pushing and a stunning pass to sub Derrick Etienne saw the midfielder send the ball off the far post to the back of the net. But as quickly as he started his celebration, the offside flag went up. It was close, but what else is new this year for the Crew? They have been suffering from inches and seconds all year! 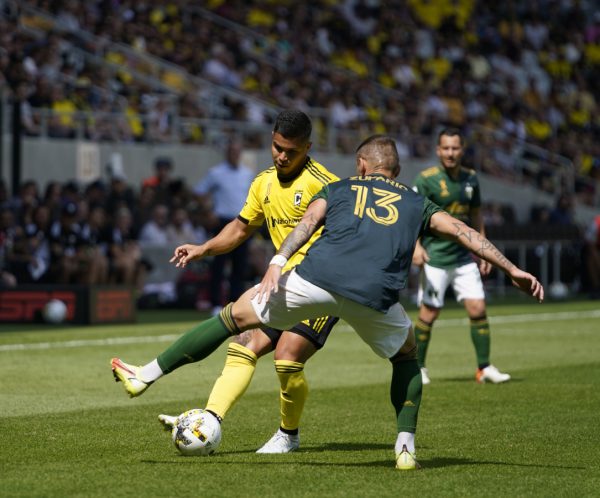 The match finally jumped into extra time with four minutes added. Whereas the Crew was the recipient of more extra time than the starting extra time in their draw with FC Cincinnati, they were done in by this very issue today.

A ball was sent to the box by Portland in the 95th minute. Columbus struggled getting it out of harm. As it pinged off Crew and Timbers players, Moreno, from 20 yards out, struck a low screamer to Room’s left that snuck just past him into the back of the net.

Taylor Twellman said it best on the ESPN broadcast: “13 points in the last 12 games they [Crew] have lost in winning positions.” Ouch!

So how did this happen?

The game flow clearly showed how Columbus dominated the first half. And the men from the Ohio capital even a spell in the 2nd half they had possession and chances to increase the lead. But as they have shown all year, they just can’t finish a game. 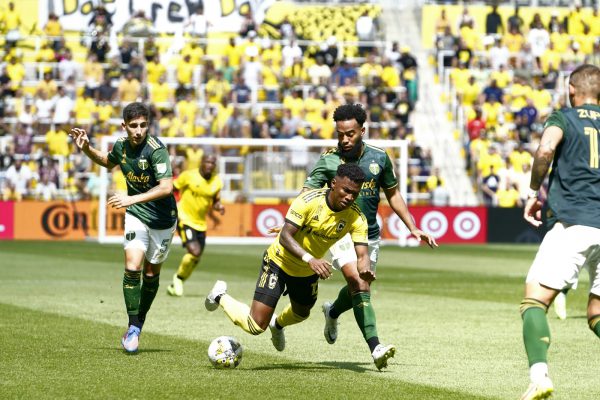 Again, the defensive woes in late moments have crushed the spirit of this team these latter matches. In a pre-match press conference, Coach Porter talked of making the most of these last four games. Clearly he was pushing that they control their own fate and was trying to pump up his squad. Today, though, you could see the anguish on the faces of the Crew players and coaches during the Portland celebrations.

The Columbus Crew won’t play again until October 1st as MLS shuts down for the international break. But when they come back, their precarious position for the playoffs will be tested. They have three games in nine days!

Having a game in hand for the final stretch could be their saving grace. But if they had taken three points from say four of their MLS-leading 15(!) draws, they would be tied for third with the New York Red Bulls right now.

Hopefully the gents will get their late match defensive struggles solved. If not, the calls for Porter’s firing will be deafening.

They follow that up with two away matches at Charlotte on the 5th and Orlando on the 9th.

Time is running out.