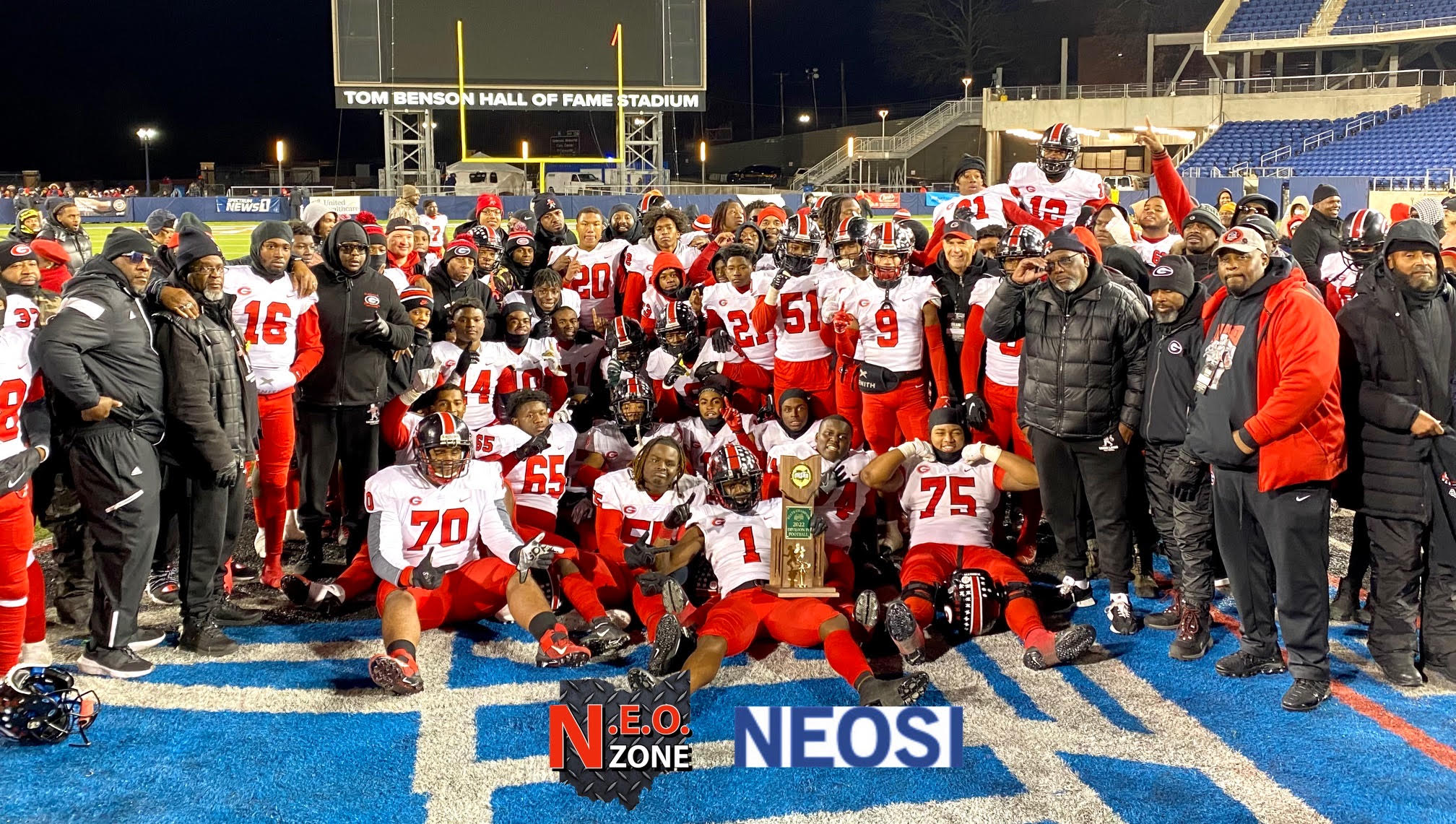 For the first time in legendary Head Coach Ted Ginn Sr.’s career, the Glenville Tarblooders are State Champions, taking down the Wyoming Cowboys 28-6 Saturday night in the Division IV Championship. Junior RB D’Shawntae Jones turned in an amazing 195-yard, three touchdown performance to lead a powerful running attack. Not only is it the first championship for Glenville, it is also the first ever by a Cleveland public school.

The Cowboys received the opening kickoff but didn’t have the ball long as Arvell Reese poked it free and Jaylind Carter came up with the recovery, setting up Glenville deep in Wyoming territory. After a false start penalty, QB Deonte Rucker found Damarion Witten for a 39-yard touchdown. After a failed two-point conversion, The Tarblooders were up 6-0.

After a fumble recovery, Glenville’s FIRST PLAY from scrimmage goes for six! 🔥

Facing Mr. Football candidate CJ Hester is a tough task, but the Glenville D came up with another stop, this time forcing a Cowboys punt. The Tarblooders would drive deep into Wyoming territory, but the Cowboys came up with a big stop on fourth down, halting the Glenville drive at the 19-yard line.

On the next play, CJ Hester would finally break one off, sprinting down the right sideline for an 81-yard touchdown. The extra point sailed wide left, but Wyoming tied the game at 6-6 midway through the first. This time it was the Cowboys defense who came up with a big three and out, giving their offense the ball near midfield.

After giving up a big run on their last possession, the Glenville D came up with a big three and out, one their offense would take advantage of. Seven plays and 79 yards later junior RB D’Shawntae Jones took it 29 yards up the middle for the Tarblooders touchdowns. After another failed two-point conversion, Glenville took the lead back at 12-6.

D’Shawntae Jones rips off a 29-yard TD to put Glenville back in front (2-pt conversion unsuccessful).

We’ve got a great battle tonight between two of the best backs in the state!#OHSAAChampionships 🏈 pic.twitter.com/WdyFSeoVR3

After the defense forced a second consecutive three and out, the Tarblooders offense took over at their own 36. Facing third and ten, Deonte Rucker found Damarion Witten for a big 33-yard completion to keep the Glenville drive alive. Seven plays later. Jones would plow in from a yard out for his second score of the game, making it 18-6 Tarblooders.

Taking over on their own 22 with just over five minutes in the half, the Cowboys offense finally found some rhythm. After picking up their fourth first down, Wyoming had the ball first and goal on the six. On third down, QB Quaid Hauer scrambled around and was intercepted by Arvell Reese just in front of the end zone as time expired. At the half, Glenville led 18-6.

A wild final sequence ends in an interception by Arvell Reese after a sack by Phillip Sains.

Great stand by Glenville to head into the break!#OHSAAChampionships 🏈 pic.twitter.com/JTNije1yXW

The Tarblooders took the second half kickoff and wasted no time in marching down the field. On the fifth play of the drive, D’Shawntae Jones struck again, this time from 45 yards out. Micquan Gravely took the handoff in for the two-point conversion to put Glenville up 26-6.

D’Shawntae Jones picks up his third TD of the night on this 45-yarder to put Glenville ahead by three scores. #OHSAAChampionships 🏈 pic.twitter.com/ubWvtRpqkO

Unfortunately for Wyoming, star RB CJ Hester played very sparingly in the second half and left for the locker room before the end of the third. That meant the run heavy Cowboys had to switch to a passing game to try and narrow the gap.

Wyoming would find some success passing the ball, but the Tarblooders defense continued to hold tough. The Cowboys would get down into the red zone, but Hauer was intercepted by Warren Bloodwork, giving Glenville the ball with just under six minutes remaining.

On offense, Glenville was content to milk the last minutes off the clock. Eight plays and three first downs later, the Tarblooders were champions for the first time in school history, knocking off Wyoming 26-6.

The Tarblooders faced a tall task in Mr. Football candidate CJ Hester. Outside of his big 81-yard touchdown run, Glenville held him to just 17 yards on his 11 other carries. The Cowboys offense relies on their star and the Tarblooders were able to lock him down. Hester left the game midway through the third with an apparent injury, forcing Wyoming to change on the fly.

Offensively, junior RB D’Shawntae Jones stole the show, finishing with 195 yards and three touchdowns. At 6’0 220 pounds, Jones was a load to try and bring down for the Cowboys as he powered through defenders all game long. Up front, the Tarblooders used a big size advantage to pave the way for their powerful running game.

The 2022 Glenville Tarblooders become the first public school in the city of Cleveland to win a state title!!!#OHSAAChampionships 🏈 pic.twitter.com/JAPXoJXiMM