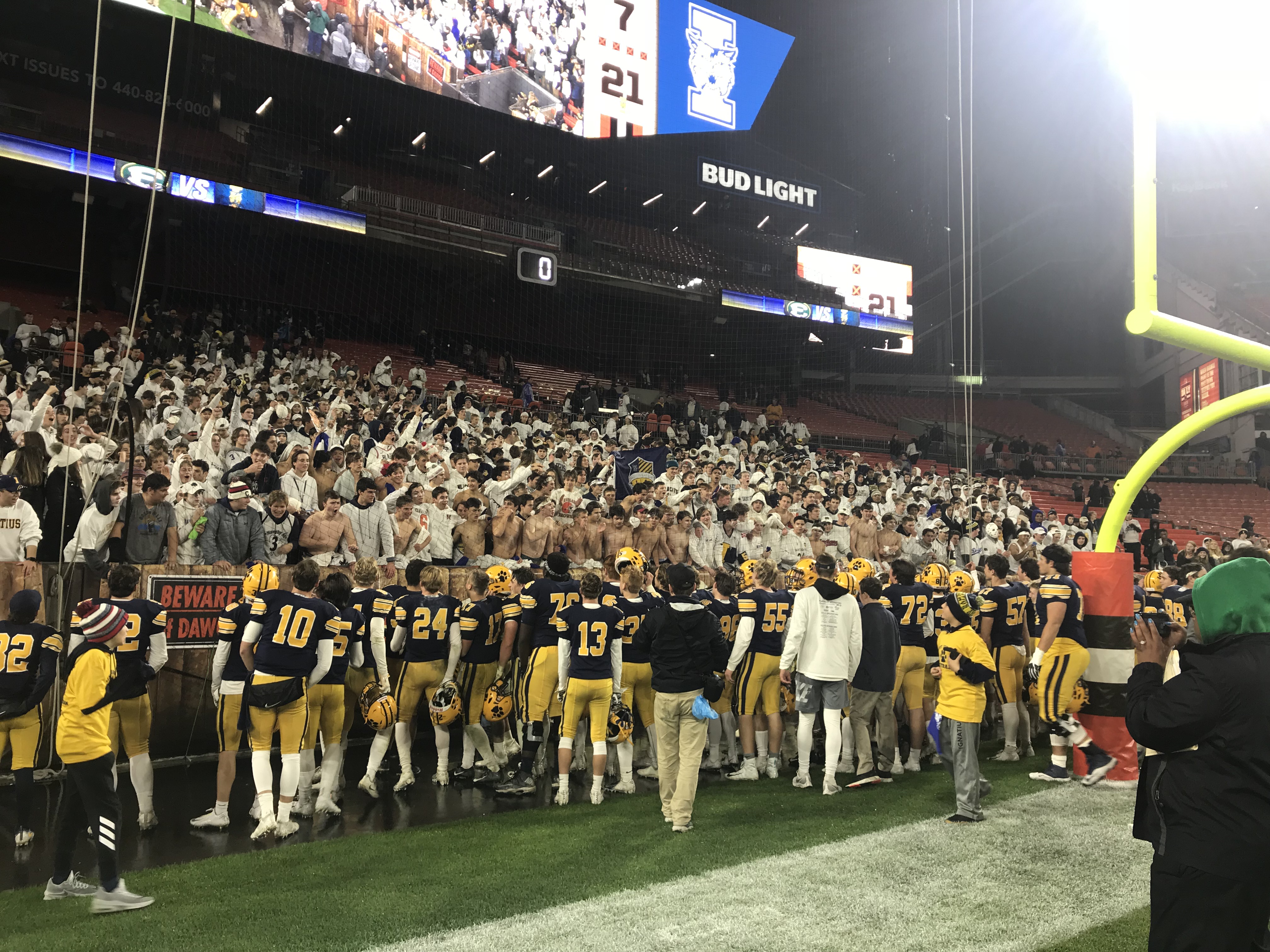 Cleveland, OHIO- On Friday night in FirstEnergy Stadium, the St. Ignatius Wildcats and the St. Edward Eagles met for the 57th time. It was a second half that was dominated by the Wildcats that would push them past the Eagles by a score of 21-7.

Not much offense was garnered in the first half. After an opening kickoff return that put St. Ignatius inside the red zone, the St. Edward defense came alive, forcing an interception that would push them into Wildcat territory.

That interception would later result in an opening drive score for St. Edward. Quarterback Garrett Dzuro ran it in from 24-yards out to give the Eagles an early 7-0 lead. St. Ignatius tied the score at seven apiece following a 16-yard touchdown run from junior running back Christopher Cantrell.

St. Edward was faced with a short fourth down inside the Wildcats five-yard line with less than 20 seconds to play in the first half. The Wildcat defense prevailed, stopping the Eagles from doing any further damage before halftime. The score would remain tied up at seven apiece after the first 24 minutes.

The second half was all about the Wildcat defense. Despite the Eagles getting down into Wildcat territory a couple of times, the defense from St. Ignatius held their own. They didn’t allow St. Edward to score in the second half and held the Eagles to under 100 total yards of offense.

Senior running back Jahadge Floyd found the back of the end zone to give the Wildcats a 13-7 lead as the third quarter was winding down. That score gave the Wildcats all the momentum heading into the fourth quarter.

The Wildcats used that momentum to their advantage. After forcing the Eagles to punt again on their first possession of the fourth quarter, the Wildcats responded by scoring another touchdown. This time it was a nine-yard touchdown run from senior John Kennedy with a converted two-point conversion.

The St. Ignatius lead would open up to 14 points and the 21-7 score at the time would be the final score.

St. Ignatius head coach Chuck Kyle knew his team would be faced with one of the toughest schedules in Northeast Ohio. After losing their first two games, he knew his team needed to make progress and they did nothing short of that.

“Three weeks ago, we’ve made some progress,” coach Kyle said. “The kids accepted the challenge and it was heartwarming for a coach.”

The win for St. Ignatius now gives them a 32-24-1 career record playing against St. Edwards. Despite ending the regular season winning seven games in a row, coach Kyle knows that his team has to be ready for a tough road ahead that lies in the playoffs. In fact, this may not be the last time these two teams play against each other this season.

“We had fun playing in this great stadium,” coach Kyle said. “But in a few minutes, it’s going to be playoff time and we wait to see who we’re playing. It’s a new season honestly and we can play [St. Edwards] next week.”