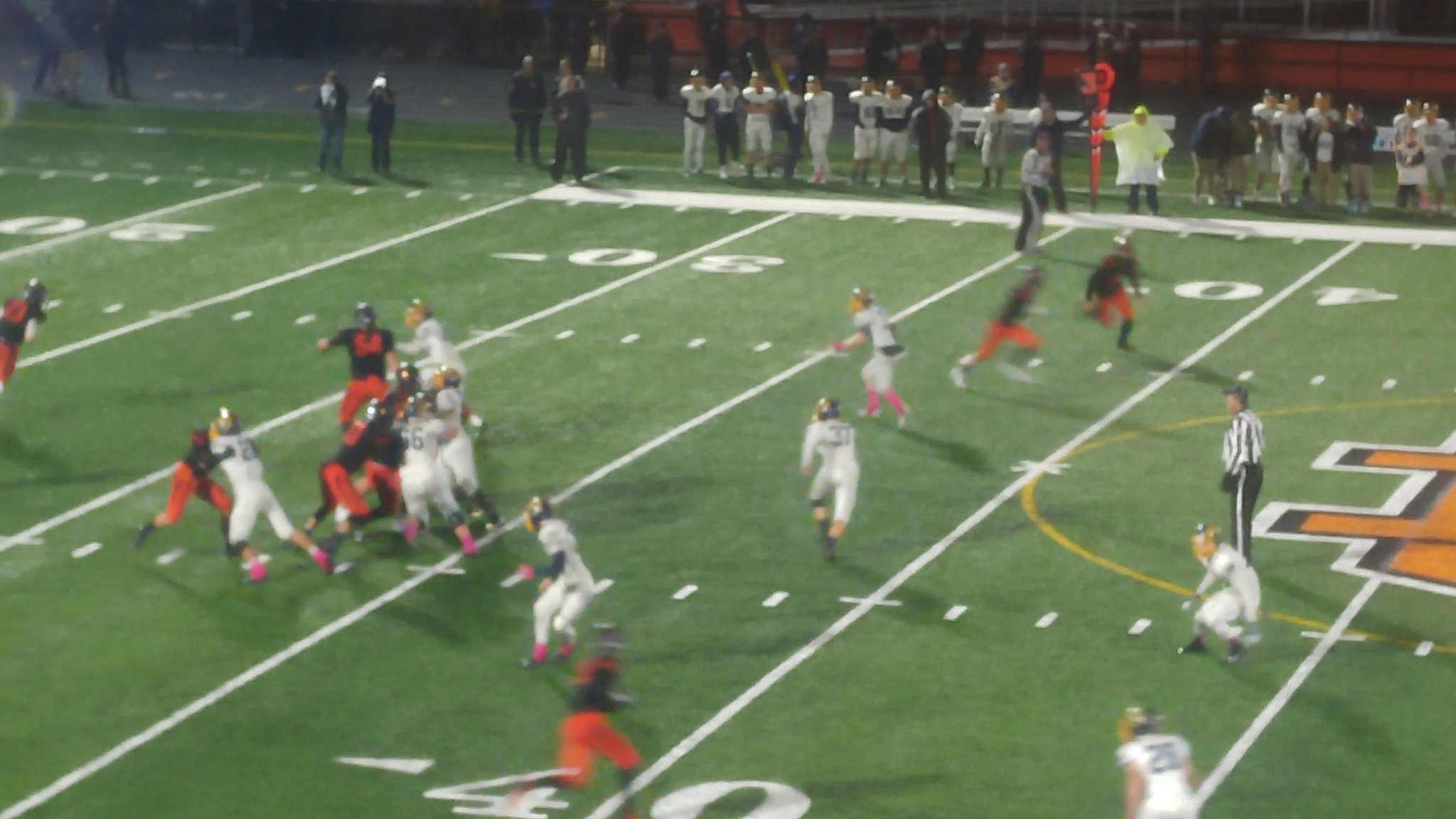 This recap is brought to you by Frankie’s Italian and also BA Sweetie.

The Olmsted Falls Bulldogs put out the Eagles flickering hope of making the playoffs with a 56-14 win tonight in North Olmsted.  The Bulldogs dominated from start to finish in one of their most impressive efforts of the season.  They will now enter the playoff’s winners of 3 straight, and 7 of their last 8.

The Bulldogs typically put teams away with their relentless running attack, but tonight they did it early and often with the passing game.  Quarterback Teddy Grendzynski threw for 227 yards on 7 of 9 passing.  He had touchdown passes of 74,41,12,14 and 45 yards.

It was five total in an amazing night for Grendzynski.  He had two to running back Michael Howard and three to his favorite wideout Braden Galaska.  He also took a quarterback option 99 yards to score early in the game.  Grendzynski finished with 121 yards on the ground.

Olmsted Falls running back Jack Spellacy had another solid night in a season that has seen many of them.  Spellacy finished with 98 yards, on just 14 carries, scoring another 2 touchdowns.

Howard who is the second half of one the best running attacks in the league, also had a great night.  Howard who has been banged up as of late, looked healthy tonight, rushing for 64 yards on 9 carries.  He also caught 2 balls for two touchdowns of 26 yards total.

Darren Anders of North Olmsted finished his senior season in style, with 94 yards on 18 carries, scoring twice.  Anders had a great season on both sides of the ball and will be sure to do some big things in college at BGSU.

After a rare 3 and out for both teams to start the game, the scoring was at a rapid pace to follow.  Grenzynski’s big night began with a 99-yard touchdown run.  The Eagles quickly answered one play later with an Anders 64-yard touchdown run, and the shootout appeared to be on.

From there it was all Bulldogs however as they dominated the rest of the night.  The Bulldogs would score 4 more times before half, and take a commanding 35-14 lead into the break.  They forced a running clock by the end of the third quarter and put it on cruise control from there.

The Bulldogs defense which has been scorched at times this season, also stepped up in a major way tonight.  They held North Olmsted quarterback Liam Fay to a paltry night.  Fay finished at 7 of 22 passing for only 21 yards.  He did have one excellent run of 30 yards on a touchdown drive however.  Fay did his best, but the Eagles were playing from behind all night long.

St. Ignatius Comes Back To Defeat St. Edward 21-7
Kenston Bombs Away On Willoughby 40-25