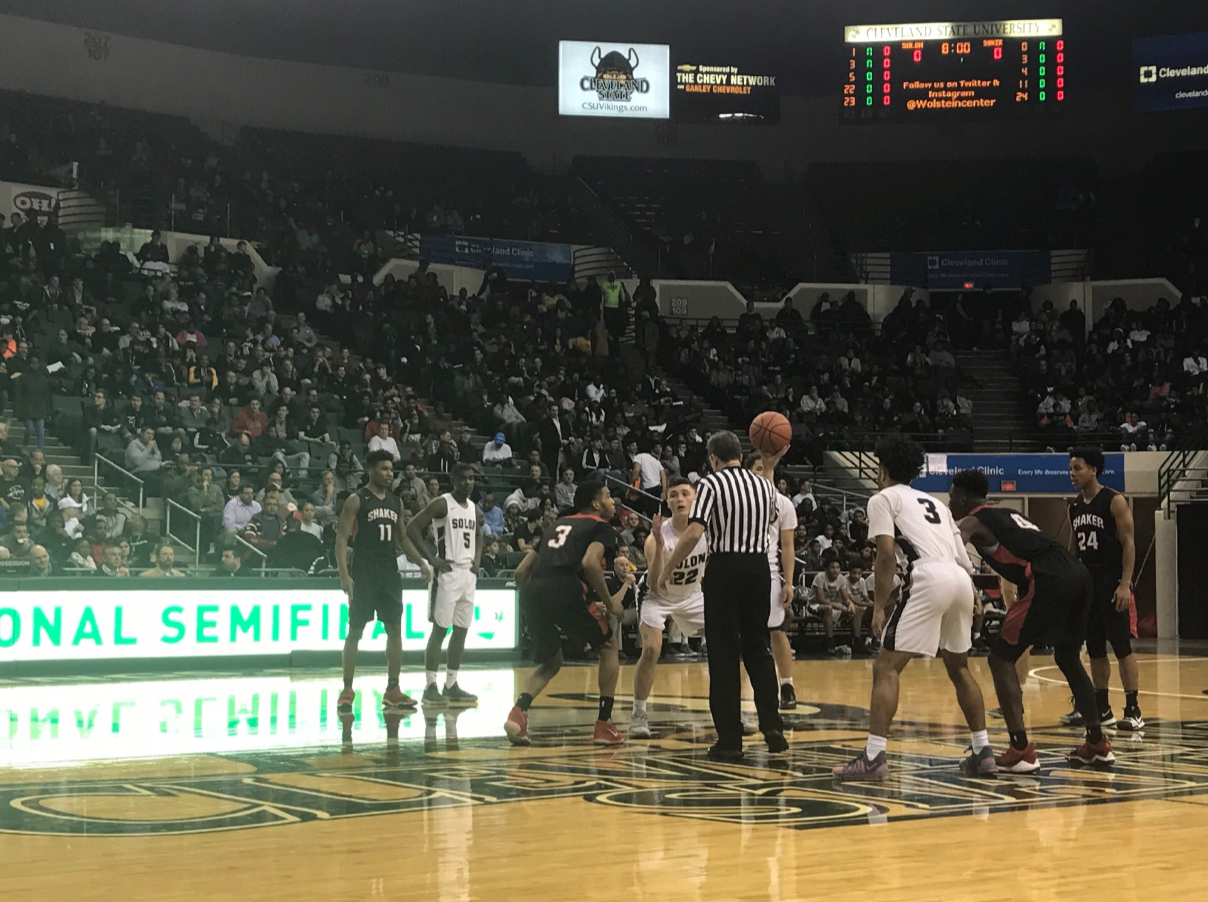 CLEVELAND– Prior to Wednesday night’s regional semifinal game, the Solon Comets had defeated the Shaker Heights Raiders twice during the regular season. Wednesday night at the Wolstein Center would be no different as they defeated the Raiders by a score of 83-76.

Mike Bekelja led all scorers Wednesday night with 35 points. Sincere Carry followed that up with 23 points along with Trent Williams scoring 13 points to round out the Comets.

As for Shaker, Christian Guess led the team with 30 points. Dale Bonner also contributed mightily with 23 points, along with 11 points from Justin Phillips.

A 5-0 Shaker run to begin the game was the energy they needed to start the regional semifinal game. Solon’s Mike Bekelja found his rhythm early on connecting on back-to-back 3-pointers.

The Raider lead would get to as many as eight points, but the Comets chipped away to head into the second quarter down by four points.

Bekelja continued his dominant scoring to start the second quarter. He gave the Comets their first lead of the game after a layup with a little more than four minutes left in the quarter. This would be a part of an 8-0 scoring run by himself, forcing Danny Young to call a timeout as the Solon lead was four points.

The lead would ascend to 10 points, but Christian Guess brought the Raiders back in it with layups on the other end. Solon would head into halftime with a 37-30 lead, 23 of those 37 points came from Bekelja himself.

Shaker got within five points with just over two minutes left in the third quarter. Bekelja and Trent Williams would make sure the lead wouldn’t get any lower than that as their late 3-pointers propelled the Comets to take a 13-point lead heading into the fourth quarter.

Bekelja knocked down two more 3-pointers to enhance his imperative scoring outburst Wednesday night. He would lead all scorers after three quarters with 32 points.

Dale Bonner and Justin Phillips revitalized the Shaker Raiders team, bringing them within two possessions late in the fourth quarter. After back-to-back Dale Bonner dunks, a 3-pointer from Justin Phillips brought Shaker within six points with less than two minutes left in the game.

With one minute left in the game, Shaker was forced to foul Solon. Following one made free throw from Sincere Carry, Dale Bonner would go down and drain a pull-up 3-pointer to get within three points. After failing to force a turnover, Carry was sent to the line to ultimately put the game away.

He would go on to make both free throws which would seal the deal for the Solon Comets.
The win now gives Solon a matchup against the Copley Indians for the regional championship Saturday night at the Wolstein Center. As for Shaker, the loss now ends the season with a record of 16-9.

**Be sure to check out video highlights from the game