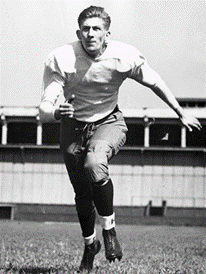 Elmer Gedeon was born 15 April 1917 in Cleveland, just overlooking Brookside Park, near the suburb of Brooklyn and just west of the zoo. The park was home to many sandlot baseball games, where Elmer and his cousin, Bob, used to play and ice skate on the lake during winter months. Bob told the story of how when they were skating once, he fell through the ice and was submerged up to his neck. Elmer slid on the ice on his stomach and pulled his cousin to safety. That act of heroism would stand as just one example of his concern for others.

Elmer, at 6’ 4” and about 195 pounds, was a star athlete at West High School. He excelled in football, basketball, and track and field. In 1935, he held the Ohio high school record for the 120-yard-high hurdles, completing the run in 15 seconds. His success at the school caught the eye of the University of Michigan coaches. 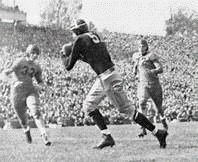 He earned three varsity letters in football (his main position was end but he was rumored to be a great passer, kicker, and the fastest man on the team) and a two-year letter earner in baseball, but his most dominating sport was track. He ran track his last two years at U of M and it was not unusual for him to run a track meet then play first base. The spring of 1938 saw Elmer set meet records in the 65 yard high and low hurdles. He also tied Jesse Owens’ American record with a 7.2 second time in the low hurdles. But baseball was his first love.

Elmer went up to his coaches, Charlie Hoyt (track) and Ray Fisher (baseball) and proposed a manner for him to run track and play baseball prior to the 1938 season. That junior year saw Elmer play an outstanding first base and hit .285 while tying for the team lead in home runs. For track, he won the Big Ten title for hurdles and finished third in the NCAA championships in the same event. 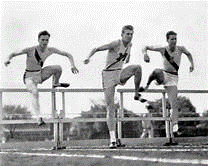 Gedeon’s senior year saw him impress scouts from Major League Baseball. He doubled up the track and baseball again, where coach Fisher said he was the most improved player from 1938.  Gedeon battled .320 leading the Wolverines to an 18-9 record (8-4 conference), just a half game out of first place. On 3 June 1939 Elmer signed with the Washington Senators. In that summer of ‘39, Elmer was assigned to the Orlando Senators, where the major league club wanted him to use his speed in the outfield. He batted .253 and stole 15 bases in 62 games. In September, Elmer got the call to join the club where he played in five games for the Senators.

After the 1939 season Gedeon attended spring training in Orlando but was assigned to the Charlotte Hornets, a minor league team, where he played centerfield and hit .271 and hit 11 home runs. Again September saw him head north with the club, but he saw no action.

The former Michigan end was drafted for the Army in January 1941 but still went south for spring training. In March of the same year, he reported to Fort Thomas, Kentucky, where he was then assigned to Fort Riley Kansas in the Calvary Replacement Center. In his letter to his fraternity pals, Elmer stated “Old Ged has been drafted,” and continued with “the only horse I ever saw in my life was the one the milkman used.”

Immediately upon arriving at Fort Riley, Elmer was made acting corporal of Troop B of the First Squadron. During the thirteen-week program he played for the Fort Riley baseball team and helped them earn third place in the national semi-pro tournament. On 22 October 1941 Elmer was accepted into pilot training and was transferred to the US Army Air Forces where he earned his wings and a commission as a second lieutenant at Williams Field, Arizona. He worked his training with the 315th bomb squadron, 21st Bomb Group in Tampa, Florida.

His first heroic event was as a navigator in a B-25, their plane clipped pine trees upon takeoff from a civilian airport in Raleigh, NC, and crashed in a swamp. Flames engulfed the plane. Gedeon crawled out of the wreckage with burns and broken ribs and realized that his fellow servicemen were still in the burning vessel. He pulled Corporal John R. Rarrat, who had suffered burns, a broken back, and both legs being broken, out to safety where Elmer’s friend died of his injuries later. In all two men were killed and five injured. Elmer spent twelve weeks in the hospital with broken ribs and burned skin, which needed grafts.  Speaking to the Ann Arbor News, he said, “The ribs gave me the most trouble. I had to rest on my stomach because of the burns so the ribs couldn’t be taped.” During his recovery, the 6’4” soldier went from 195 pounds to around 145. 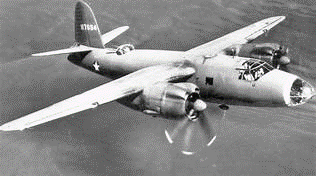 By July 1943 Elmer Gedeon was healed and found himself a part of the 586th Bomb Squadron, 394th Bombardment Group (“The Bridge Busters”) US Army Air Forces. This group was formed to train with the somewhat difficult Martin B-26 Marauders. This twin-engine medium bomber was known to give airmen trouble since the Marauder had to be flown at precise airspeeds, confusing and frustrating pilots who trained in planes with slower speeds. Elmer had at least two instances of difficulty with the B-26 during training at Oklahoma’s Ardmore Army Air Field, home to this training.

With training completed, Elmer’s group was sent to Boreham, England in February 1944 and became part of the Ninth Air Force. Newly promoted Captain Elmer Gedeon was the Operations Officer for the 586th, one of only four squadrons in Europe. As the Ops Officer, Elmer decided the crews and planes for the missions his commanders required. One of the most popular officers, Elmer did not go out on bombing runs. But on one day, on 20 April 1944 just five days after his 27th birthday, Elmer found himself at the controls of a B-26 with a mission to destroy a German V1 site in the woods off the French coast. It was the group’s thirteenth mission. 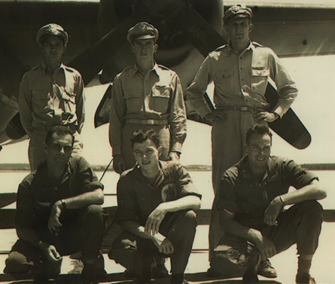 According to Gary Bedingfield, longtime author of WW2 novels on baseball heroes, here’s the story of the fateful trip:

Gedeon nestled his plane into the number two position behind group leader Cptn. Darrell Lindsey and they were soon out over the English Channel climbing to a height of 12,000 feet. It was after 7:30 P.M. when the group approached the target area and encountered intense, accurate, and heavy anti-aircraft fire. The sky was suddenly full of deadly puffs of black and gray explosions which generated hundreds of pieces of jagged steel that could easily set oxygen and gas tanks blazing, or rip through the wings of a plane and just as easily through the bodies of the men inside. Lining up to make the bombing run the flak grew heavier, thicker and more deadly, causing planes to bounce around from nearby bursts. Approaching the target, a wave of frigid air raced in as the bomb bay doors were opened and the Marauder climbed suddenly as the bombs were released on their target.

Moments later the bomb bay doors were closed, and the Marauder suddenly received a direct hit from anti-aircraft fire below the cockpit, instantly filling the plane with flames. Within seconds the stricken bomber peeled away. Bail-out procedure required the bomb bay doors to be opened but neither conventional nor emergency systems would open them. With flames filling the cramped confines of the cockpit, co-pilot James Taaffe struggled to open the pilot’s and co-pilot’s top hatches and saw the bombardier, Pvt. Atkinson, and bombardier/navigator 2/Lt. March heading towards the cockpit to follow him out.

Elmer Gedeon was hunched over the controls, with no movement, according to James Taaffe. The crew members that were able jumped from the airplane. The B-26 crashed and burned upon impact.

Elmer’s remains were sent back to the US over a year after his wife and father learned of his death. He is buried in Arlington National Cemetery. 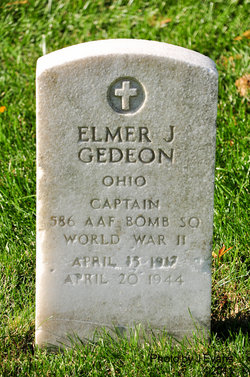 Elmer Gedeon was the first major league ball player to be killed in action in World War II.  His major league career lasted five games. Here is his stat line:

As we remember those that fell this weekend, keep in mind the story of Elmer Gedeon, the star athlete from Cleveland and member of the University of Michigan’s Hall of Fame, one of the few three sport letter winners, on the grounds of Ann Arbor.