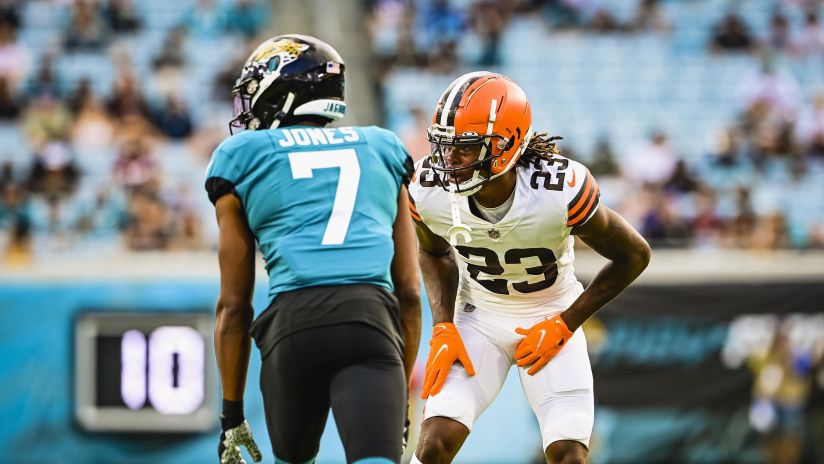 The Cleveland Browns started off the 2022 preseason with a 24-13 win in Jacksonville over the Jaguars. New Browns quarterback Deshaun Watson saw his first game action in 586 days, but the night belonged to three rookies.

Watson looked like he has been out of action for a year and a half. Drops didn’t help his numbers, but the Browns’ #1 offense looked shaky. Watson ended his brief appearance going 1-5 for seven yards. The bulk of the quarterback play fell to Joshua Dobbs and Josh Rosen. Both looked rather good. Dobbs threw for 108 yards on 10/13 passing and a TD. Rosen completed 6/7 for 56 yards. Jacoby Brissett was a healthy scratch and will likely be placed in bubble wrap for most of the preseason. With an impending suspension for Deshaun Watson, the Browns can ill-afford to lose their QB2 to injury.

As I mentioned, the night belonged to three rookies: Martin Emerson, Jerome Ford, and Isaiah Thomas. Each were excellent in their debuts in brown and orange.

Emerson, a 3rd round pick out of Mississippi State, made the play of evening intercepting a C.J Beathard pass, tearing it out of the arms of intended receiver Jeff Cotton, and raced 75 yards for a touchdown. Emerson flashed in his first game as a pro and showed the high ceiling that contributed to the Browns trading CB Troy Hill on draft day.

Jerome Ford was the 156th player taken in the 2022 draft. He made the short trek up I-71 from the University of Cincinnati to Cleveland and found himself in a crowded running back room. Ford, however, did his best to stand out on Friday night. Ford carried 10 times for 57 yards and a touchdown. He had an impressive 41-yard rum and added four catches for 45 yards and a touchdown.

7th round pick Isaiah Thomas also looked good in his debut. The DE out of Oklahoma tallied three tackles, all for losses, and two sacks. Thomas did what he should do against the talent against which he was playing. He looked more polished as a pass rusher than I expected and could give the Browns another rotational piece in the regular season.

Unfortunately, the news was not all good for the Browns. Starting Center Nick Harris was carted off the field after the second play of the game with a knee injury. We’re all hoping for the best, but it didn’t look good. Harris was one of three players I expected to have a breakout season, but that is now very much in jeopardy. Harris will undergo a battery of tests in the coming days to determine the extent of the damage to his knee.

The Browns will host the Philadelphia Eagles next Sunday at First Energy Stadium. Kickoff is at 1pm.