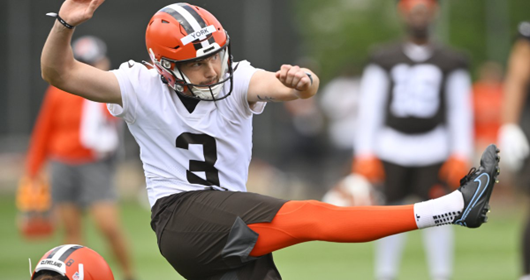 The Cleveland Browns came into training camp after having yet another year of new kickers. Chase McLaughlin hit on 71% of his field goals during last season. That was good for dead last among kickers who tried at least 20 field goals last season. The Browns knew they needed yet another change at kicker for the upcoming season. This time they went through the draft. They used their fourth-round pick on the kicker out of LSU, Cade York. Cleveland Browns fans are hoping this isn’t just another year with a different kicker. They want him to be the next “franchise kicker.”

Cade York attended Prosper High School in Prosper, Texas just north of Dallas. Prosper High School played in Texas 6A Division II. At Prosper, York became a three-star recruit according to ESPN and 24/7 Sports. In 2019, he attended the Under Armour All-America Game. In the game, he kicked a 59-yard field goal which is the longest in the game’s history. By the end of the 2018-19 season, he was named to the All-Texas second team. In his junior year, he led Prosper to a Regional Semifinal appearance. After high school, he decided to commit to LSU.

The Browns have seen multiple rookies impress throughout training camp. Guys like CB Martin Emerson and RB Jerome Ford have received high praise from the coaching staff. Cade York however won over the hearts of Browns media members. They voted on the Maurice Bassett Award, that’s given annually, and came to Cade York as the winner. This award is given to the best rookie throughout the training camp. York is deserving of this award based off his numbers. He went 28-30 in field goals throughout camp and had a long of 57 yards. Many media members were in awe of his leg when he hit a 54-yarder through the top of the uprights. This would’ve given him another 10-15 yards to play with. With public camp now over, Cade York looks to put himself in a different conversation then past Browns kickers and be with the team for years to come.