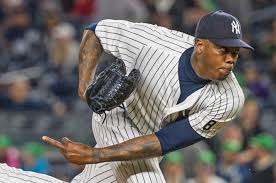 According to MLB writer Bruce Levine, the Cleveland Indians “could be close” to acquiring left-handed closer Aroldis Chapman from the New York Yankees.

MLB source- the Cleveland Indians have the best names on the table for Aroldis Chapman. Deal could be close Washington also very aggressive

The first names that come to mind are Bradley Zimmer and Clint Frazier, but since Chapman would only be a three-month rental and becomes a free-agent after the 2016 season, perhaps the Indians are offering some lower-level prospects.

Just a few names to consider include starting pitchers Mike Clevinger and Cody Anderson and middle infielder Erik Gonzalez. Those are purely speculation, but could be names on the Yankees’ list of targets.

9 Keys To The Indians Second Half
Report: Yankees Asking Indians for Zimmer or Frazier Plus Another Top-Tier Prospect for Chapman