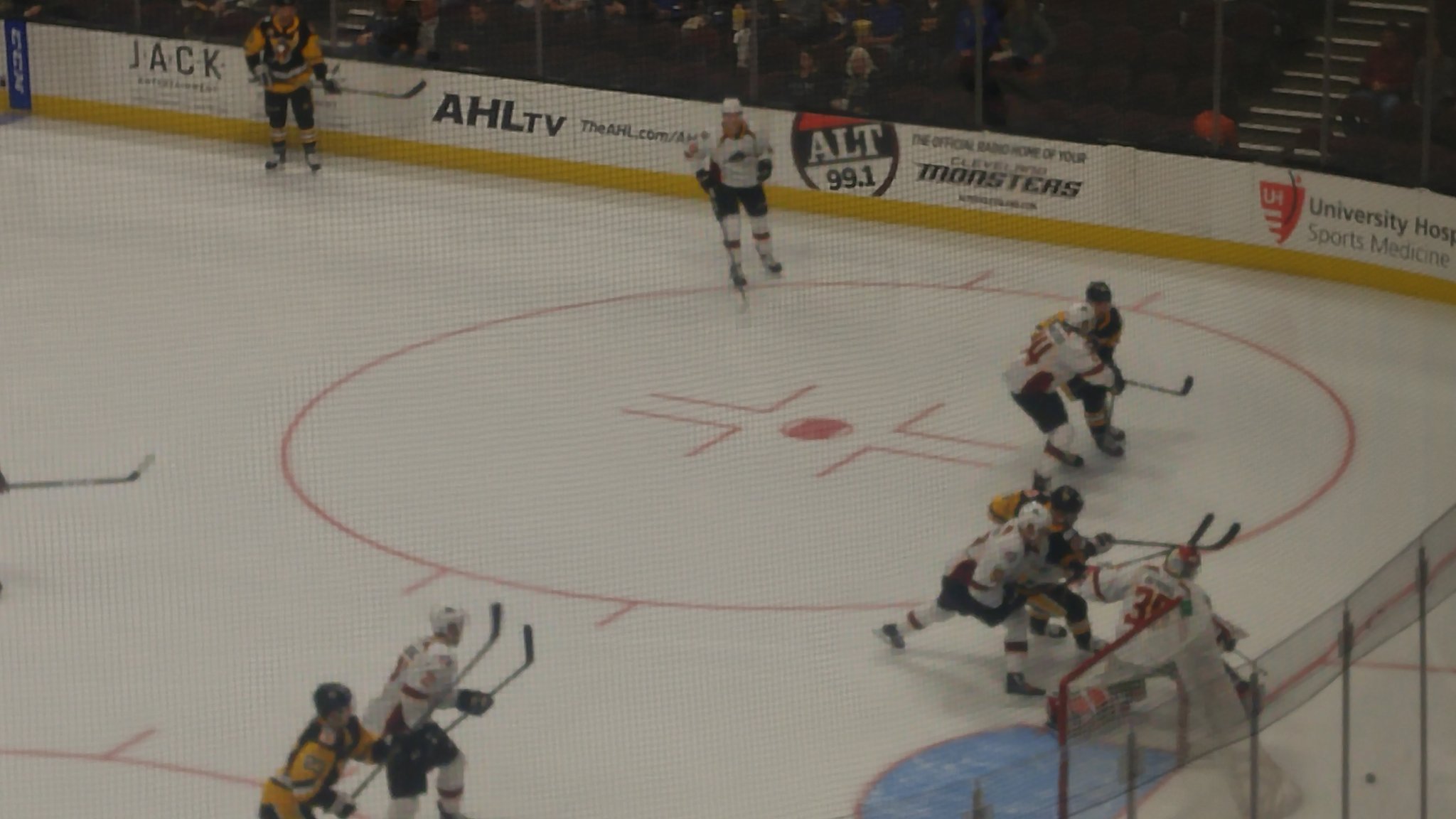 This Monsters recap is brought to you by our premier Monsters sponsor, “Jenny’s Old-Fashioned Popcorn”. You can check them out on line here.  https://www.jennyspopcorn.com/

The Monsters on the other hand couldn’t convert several chances and spent the majority of the game down a man playing from behind. Not a good recipe for success. Also, not helping matters for the Monsters was the big night by Penguin goaltender Anthony Peters who tossed the shutout. He did not allow any of the 28 shots at him get past his guard. His also shut down all 6 Monster power plays.

Both teams came out rather physical, and it led to a quick two-minute minor assessed to Mark Letestu of the Monsters. Less then 30 seconds into the penalty kill, the Monsters dug themselves a deeper hole as Dan DeSalvo got called for hooking, creating a 2-man advantage for the Penguins. The Monsters managed to get it back to a 1-man disadvantage before the Penguins broke through at the 6:48 mark of the first period.

The power play goal came off the stick of Garrett Wilson, his first of the season. On the assist was Stefan Elliot. The Monsters would have a chance to tie it about 10 minutes later with a two on one break, however Penguin goaltender Anthony Peters made a beautiful save.

The Monsters would get their first chance at a power play of their own after the save, when Ethan Prow got called for slashing. Despite several excellent chances, Peters continued to shut the door on the Monsters attack and kept it at 1-0. The period would end by the same score with the Penguins outshooting the Monsters 13-12.

The Monsters managed to kill another penalty less than a minute in the second period. They put themselves in that position when Sam Vigneault got caught cross checking. Not only did they kill the penalty, but earned a power play themselves when Garrett Wilson got booked for hooking. The Monsters once again failed to convert however as the game remained 1-0.

After failing to score, the Monsters would shoot themselves in the foot again as Gabriel Carlsson got called for interference. The Penguins would cash in this power play seconds later with a Sam Lafferty goal. He took the assist from Sam Miletic and blasted it past Monster goaltender Jean-Francois Berube.

Moments after allowing the goal, the Monsters would commit another penalty. This one was slashing at the hands of Kole Sherwood that would put them right back on the penalty kill. They managed to dodge this bullet, and successfully kill the penalty. They were still looking at a two-goal deficit in the face however with under 10 minutes to play in the second period.

It was then time for the Penguins to spend some time in the box as Chris Summers got hit with an interference call. This gave the Monsters another chance to find the back of the net, and cut the lead in half. Once again, they failed to convert. The period would end by the same score of 2-0 Penguins.

The third period was marred with penalties as the Monsters simply could not keep five men on the ice at the same time. To their credit they were able to kill 4 of 5 power plays the Penguins had in the period. The Penguins ended all doubt with 5:14 left with a power play goal by Anthony Angelo.

This was game one of a two game set between the two teams, as they will play again in Cleveland, this Saturday at 7pm. The Monsters came in winners of three straight to open up the season for the first time in team history.

Vince McKee can be reached on twitter at VinceTheAuthor