Patience is Slowly Becoming a Luxury the Indians Can’t Afford 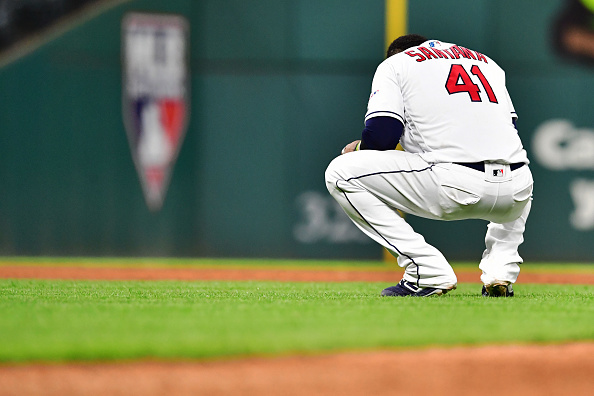 One was a scoreboard which featured minimal run production for the Tribe. The other was manager Terry Francona looking a little exasperated as he continued to preach patience when it comes to his team’s lack of offense.

After the Indians put forth yet another toothless offensive showing, getting shut out for the second time in the last three games, Francona insisted this was no time to panic. Sure, Cleveland boasts one of the worst offenses in the majors. However, per Francona, it’s still too early to make roster changes.

I’m not here to say he’s wrong. What I will say, though, is he won’t be right for much longer. Cleveland can afford to wait these struggles out now, but said luxury is slowly approaching its expiration date.

May is hardly the right time to declare a season as already over. The Indians are a mess right now, but there’s no guarantee they will be in a few months.

At the same time, when it comes to their offense, calling it a mess is being polite.

The stats are an eyesore, to say the least. Only five teams have a lower OBP than Cleveland. Only two teams have generated fewer RBIs. Only one team has a lower collective batting average.

Meanwhile, Cleveland is realizing this won’t be like last year, when the AL Central was so bad that no consequences came with any struggles experienced. The Minnesota Twins have one of the best records in baseball, and currently own a four-game division lead on the Indians.

It’s safe to say that, if Cleveland wants to clinch its fourth-straight division title, it’ll actually have to earn it this time around.

Right now, the team doesn’t look capable of such a feat.

The rotation is missing two key pitchers due to injury, adversity even the best teams would have trouble overcoming. However, the biggest issue remains the Indians’ glaring inability to score runs.

As mentioned, Francona isn’t completely wrong in his wanting to stay patient. The concern, however, is that some of the players the Indians are remaining patient with have never provided any hope better days are ahead.

Tyler Naquin hasn’t proven an ability to get on base consistently since 2016. Jordan Luplow is a career .201 hitter. Roberto Perez hasn’t finished a season with an OBP above .300 since 2015.

So, while players like Jose Ramirez and Jason Kipnis have shown they can navigate out of a funk at some point in their careers, the aforementioned players haven’t.

Knowing this, and knowing Cleveland will be going toe-to-toe with the Twins in the standings all year long, you have to wonder just how much longer Francona and crew can keep preaching patience.

Honestly, considering how putrid the offense is looking, we may already be to the point where the Indians need to make some call-ups. The two most popular candidates for this are Oscar Mercado and Bobby Bradley.

Both players are currently standing out with the Indians’ Triple A team, with the former batting .290 and the latter at .299. Bradley has 17 RBIs for the year, while Mercado has 14.

If you’re wondering, each has more RBIs than all but one player on the Indians’ current roster.

Sure, the difference between major and minor league pitching is significant. There’s no guarantee Bradley or Mercado could produce numbers like that with Cleveland.

At the same time, it’s also difficult to believe whatever they could offer would be worse than what the Indians are currently getting.

I don’t imagine Bradley and Mercado will hear their names called in the very near future. After all, the Indians seem fully committed in waiting out their currently dormant bats.

Eventually, though, they’re going to hit a point where doing so is no longer an option. If you ask me, said moment isn’t too far off in the horizon.