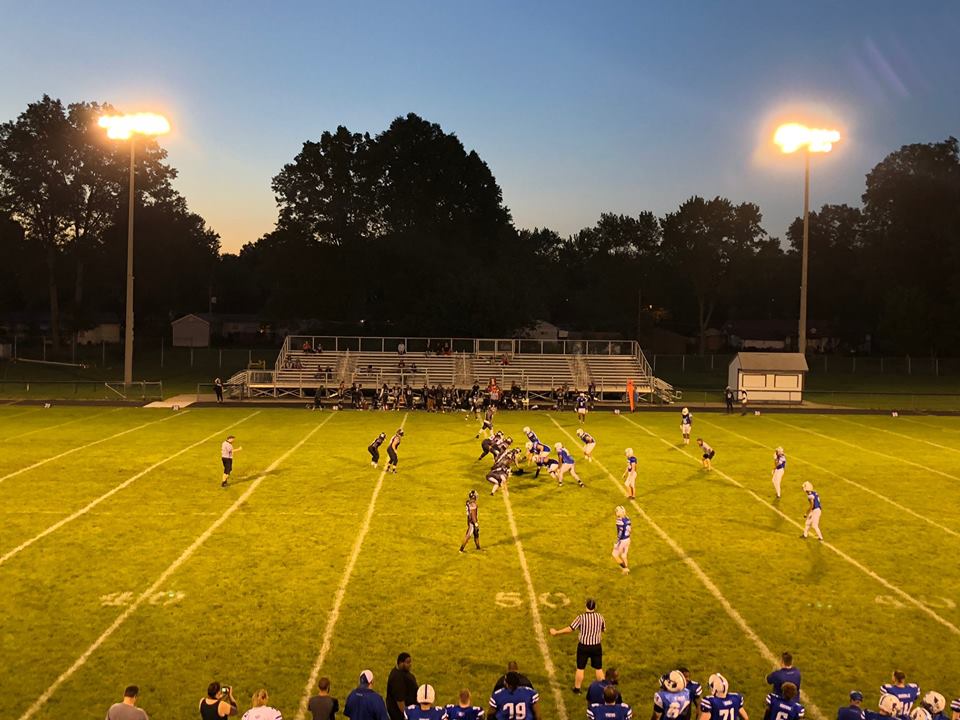 SEBRING, OH – While the Ohio Raiders are just a second year squad they have now broken the team record for points scored in a game as a team in two of their last four games as they were victorious on Saturday night 65-0 over the Ohio Gladiators.

With a few returning weapons at their disposal the Raiders wasted no time offensively getting themselves on the scoreboard as Rapheal Hurd jaunted in from six yards out for the games opening marker with 8:40 left in the opening quarter.

Starting for the first time of what would finish as seven of their nine possessions inside the Gladiators half of the field the Raiders utilized three plays to cap off a 30 yard drive that ended with a Ray Catley 19 yard run to put the visitors on top 13-0 following a Josh Brebrant extra point.

After a strong defensive stand that forced a Gladiators turnover on downs at their own 15 the Raiders again hung a touchdown on the board when signal caller Brandon Hanna connected with tailback Kylan Wells for a 13 yard score to run their advantage to 20-0 with 1:26 remaining in the opening period.

Defensive back Levi Wells scoop and score of a Gladiators fumble saw the score balloon to 26-0 with 17.2 seconds left in the first and saw a two-point conversion attempted pass to Lance Kandel fall incomplete.
As quickly as Wells had struck the Glads offense on the previous drive he stung the hosts once again just moments later as he pilfered a William Bolanz pass and put his own team on the offensive at their own 40.

Ohio’s offensive unit was once again able to move the football and pick up a first down on a 22 yard snag by Chris Netters but were forced to settle for a 47 yard field goal by kicker Josh Brebrant to run the score to 29-0 Raiders.

The Gladiators started their next possession with their best starting spot at their own 37 and moved across midfield for the first time in the game with 6:13 left in the opening half but saw their hopes of a score come crashing down as a Raider record 75 yard pick six by Christian Nogueras and a Brebrant extra point pushed the lead to 36-0 with 5:42 to go in the half.

Following the Gladiators third interception of the first half the Raiders started with the football 34 yards away and used just one play to up the score to 43-0, a pass from Hanna to Chris Netters.

On the last possession of the first half the Raiders failed to score for the only time in the contest as a Brebant 30 yard field goal attempt was declared a miss and send the game into the break with a 43-0 separation between the two squads.

Three second half possessions took place under the running clock rules in the second half for the Raiders and all three ended in scores. Having chosen to take the football to start the second half of play the Raiders stormed 40 yards in seven plays and pushed their advantage to 50-0 on a Hanna touchdown run from a yard out that broke the team record for points of 47 set in Week 2 against the Westmoreland Wolves.

A blocked punt and a Kyle Pesta fumble recovery gave the visiting team the football at their opponents 25 and again they wasted no time at all as Hanna tossed his third touchdown of the night and 11th in five games this season with the Raiders and Erie Express of the GDFL. Lance Kandel’s score with 1:23 to go in the 3rd and Brebant’s extra point ran the advantage to 57-0.

Another strong start to a drive for the Gladiators that saw a first down of 15 yards on the first play from their own 40 was quickly halted on the next play as AJ Cephus and Prishod Koonce met at the QB for a sack and saw the home squad turn the ball over on downs two plays later.

With Lance Kandel now under center for the Raiders the second year squad picked up four first downs en route to a 49 yard touchdown drive that was capped off by Cephus plunging in from 5 yards for a score. Ray Catley who scored earlier in the game and led the Raiders ground game added a two-point conversion run to provide the final margin in the 65-0 victory.

Next week the Ohio Gladiators (0-4, 0-3) will be on the road in Copley, Ohio as they seek their first win of the season against the NEO Silverbacks.

Beginning at 7pm and broadcast live on the Ohio Raiders Football Network the Raiders (4-1, 3-0) will welcome the WPA Wildcatz to Medina’s Ken Dukes Stadium for a PAFL Tier-1 battle.

In his first game of the season with the offense Hanna led the passing attack by connecting on 10 of 17 passes for 194 yards and 3 touchdowns. Chris Netters led the wideouts with 3 receptions for 68 yards and a score while Ray Catley led the ground gainers with 80 yards and a score on 11 totes of the football.