Kenston Bombs Away On Willoughby 40-25 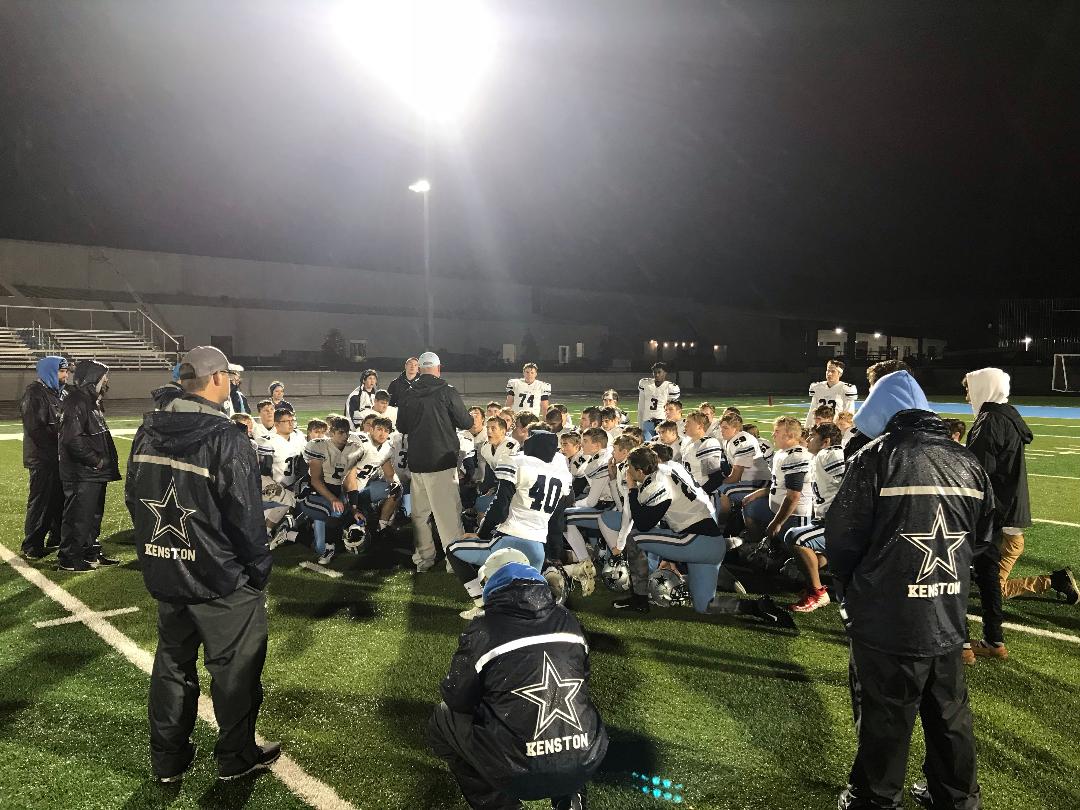 This article is brought to you by Westlake Interior Painting

WILLOUGHBY, OHIO – The Kenston Bombers held off a second half rally by the Willoughby South Rebels on Friday (Oct. 26) night at Harry E. Winters Stadium. The Rebels scored 22 straight points in the second half but fell to the Bombers 40-25.

“When South pulled within one score, I told the team that we had to win the game,” said Kenston head coach Jeff Grubich. “South is a well coached team, I have a ton of respect for Coach Duffy. He had his guys ready to go in the second half and we came out flat. We got punched in the mouth but they stepped up in the fourth quarter and got us the W when it mattered the most.”

Willoughby South scored three straight touchdowns in the second half, trimming a 30 point lead to eight before Kenston put the game away late.

Both teams came up empty on their first possessions in the game but Kenston cashed in on the next possession. After a run heavy drive, South’s defense held tough in the red zone as Anna Sanders kicked a 25-yard field goal. Kenston took a 3-0 lead with 7:13 left in the first quarter.

Anthony Valocchi of Kenston blocked South’s punt on the next possession and they took advantage of the short field. Jon Tomcufcik found Tyler Mintz for a 19-yard touchdown pass and then rushed in the two-point conversion try, giving Kenston an 11-0 lead with 3:50 left in the first.

Willoughby South cut the lead to 11-3 with a 39-yard field goal by Dominic Hahner with 38 seconds left.

On the next kickoff, Jay Middleton returned the kick 85 yards to paydirt as Kenston closed the first quarter with an 18-3 advantage.

With 2:38 remaining in the second quarter, Tomcufcik hit Mintz with a 68-yard touchdown pass down the left sideline as Kenston continued to pull away in the first half. The Bombers led 25-3 with over two minutes left.

Willoughby South went three and out as the Bombers took over with 2:07 left. Tomcufcik had two big passes while Jack Porter capped the drive with a 16-yard touchdown run with 21 ticks left. Kenston took a 33-3 advantage into the halftime period.

South found the endzone on the first drive of the second half with a seven play, 63-yard drive. Ira Sampson scored from five yards out as the Rebels made it 33-10 with 8:23 left in the third quarter.

Kenston was stopped on fourth down on the next possession as South took over on downs. On the thirteenth play of the drive, Rico Small scored on a five-yard jet sweep run. With two minutes left in the third, South continued to chip away, making it a two possession game at 33-17.

Neither team manufactured anything on their first drives of the fourth quarter. After a bad punt in rainy conditions by Tomcufcik, South took over in Kenston territory. On the first play of the drive, Justin Grosel found Small open on a cut from 37-yards out. South lined up with Small at quarterback in the wildcat for the two point try. Small put a floater up to Vince D’Eusanio, which he brought down. South pulled within eight with 8:20 left, 33-25.

Tomcufcik put the game on ice for Kenston as he broke free down the left sideline for a game-clinching 53-yard touchdown. Kenston weathered the rally 40-25 on a cold, rainy night in Willoughby.

Kenston outgained South 436-320 in the game. The Bombers used their rushing attack to the tune of 252 yards, with 184 passing yards. South finished with 184 yards passing and 136 yards rushing.

Kenston finished the regular season at 9-1 overall, and 6-1 in the WRC, which they clinched a share of the championship. South dropped their sixth straight game, finishing the season 2-8 and 1-7 in the conference.

Grubich added, “We need to get better, clean up those penalties and get ready to work. We had to get to 1-0 tonight, we did tonight. The chase is on for us next week.”

Kenston will play at home in the first round of the OHSAA playoffs, starting Friday (November 2) night. The official playoff matchups will be released on Sunday.