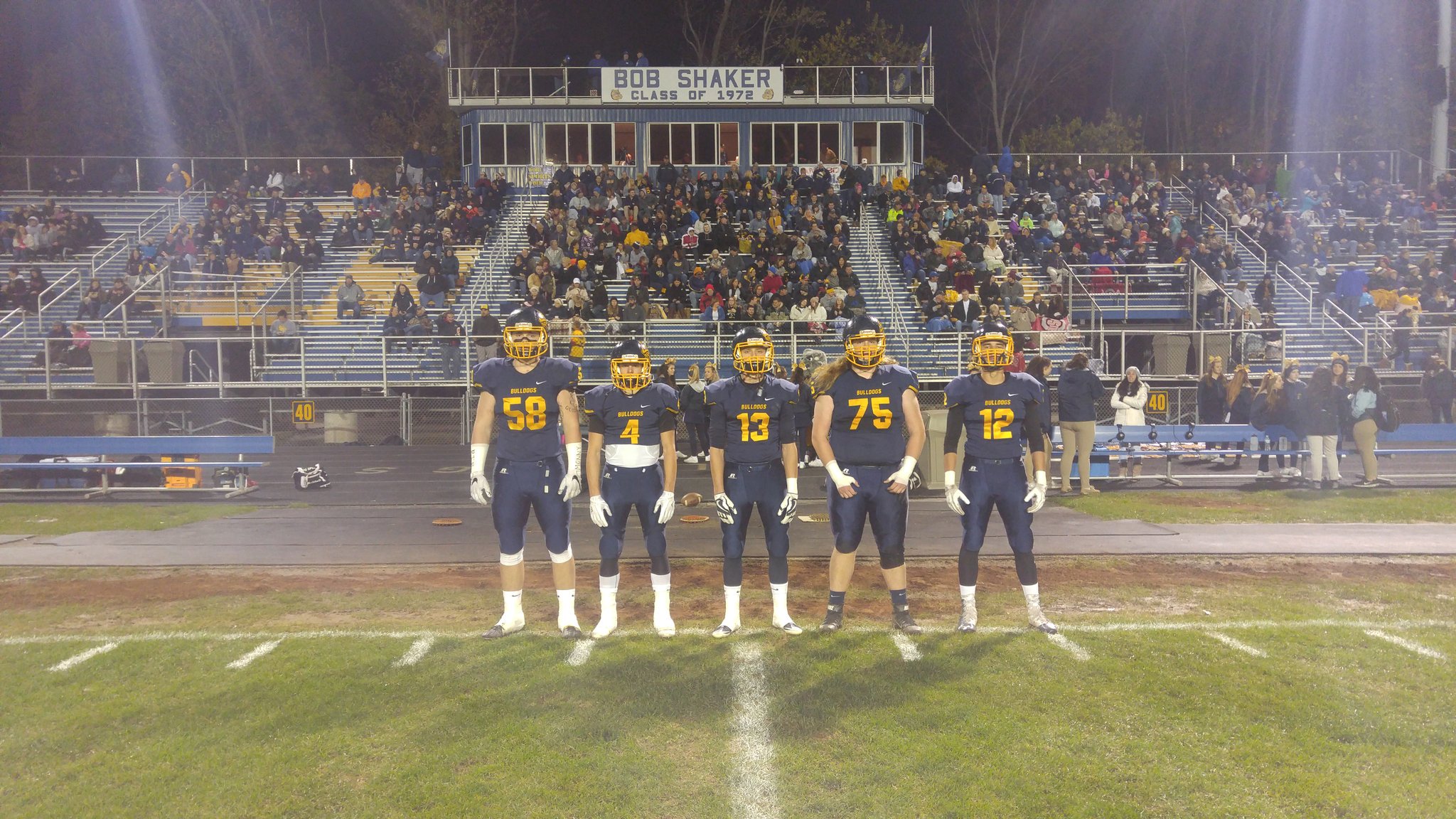 OLMSTED FALLS, Ohio– Round one of the OHSAA High School Football Playoffs started off tonight with incredible action all over the state. The Middies of Midview entered Olmsted Falls fresh off an 8-2 season and looking to avenge a 41-27 Week 8 loss to the Bulldogs less than a month ago.

It was not to be, as once again the incredible rushing attack of the Olmsted Falls Bulldogs proved to be too much to contain. The Bulldog triple-headed rushing monster compiled 218 total rushing yards in a 26-23 victory over The Middies to advance to the second round of the state playoffs. The leading rusher was Michael Howard with 108 yards and a touchdown on 10 carries.

A trick passing play in the closing seconds secured Olmsted Falls one of the most dramatic wins in OHSAA Playoff history. Running back Jack Spellacy threw a 60-yard halfback pass touchdown to Braden Galaska with 42 seconds left on the clock to win the game. No one saw the play coming and it proved to be a genius call by Head Coach Tom DeLuca to win his team the game in shocking fashion.

“We’ve been in four games in the last two years in which we had to come on a two-minute drive to win the game,” said DeLuca, who took us behind his thought process at the time of his gutsy call. “We’re not afraid to run the ball on those two-minute drives, thus a defense cannot just play us in a prevent defense and not account for the run. Their safety and their corner both bit on the halfback lead and we threw it over the top. We have been practicing it for the last four weeks and thank God we did!”

The craziest part of it all was that only 90 seconds earlier, it was a trick play by Midview that gave them the 23-20 lead with two minutes left to play. Midview was down 20-17 at the time with a few tics over two minutes remaining on the clock when they ran a double reverse that allowed wide receiver Ben Gendics to break off a 64-yard touchdown run that appeared to seal the victory for the Middies.

It was their first lead of the entire game, and for all intents and purposes appeared to be enough to vault the Middie’s into the second round of the playoffs. But, the Bulldogs were not done yet.

“We were in our nickel personal and trying to play the pass so we were a little weak on the backside,” DeLuca said describing what could have been a back-breaking moment. “Credit to them because they saw that, and that is a good play to go to and he had the edge contained. Our backer pursued the way he was supposed to, but then they kicked him out and cut it up. It was a great play call on their end and put them in great position. They caught us on that play and did a good job there.”

The Midview Middies did their best to counter with some of their best as well, but it wasn’t quite enough. Quarterback Seamus Higley finished with 128 yards passing on 10-of-23 attempts with one touchdown. He also rushed for 23 yards and appeared to lead the game winning drive, before the dramatic ending. Star tailback Connor Wolfe was held in check, only rushing for 44 yards on 19 carries with no scores.

After the Olmsted Falls defense forced a three-and-out of the Middie’s offense to start the game, their offensive right went on the attack. On their second play from scrimmage it was Michael Howard breaking off a 70-yard rush down to the one-yard line of Midview. Luke Lombardo would punch it in on the next snap to put the Bulldogs up.

It wouldn’t take Midview long to reply as they took the ensuing kickoff in for a touchdown. It was the speedy Isiah Johnson running it in from 90 yards out to tie the game.  As the first quarter was coming to a close, the Bulldogs went up again. This time, it was on a touchdown toss from Grenzynski to Galaska that should have been picked off, but instead, led to a touchdown on a missed chance by the Midview defender.

The Middies did manage a field goal before the half was out to pull within three points at the break. They were playing without Isiah Johnson who got banged up on the next series following his touchdown. They were also without Seth Sanders who left the game injured as well. Despite missing two of their better playmakers, the Midview attack did manage to score in each quarter of the game.

Olmsted Falls opened the second half with a 7 minute, 41 second touchdown drive. The long and impressive series of third and fourth down conversations was topped off by a 10-yard Michael Howard touchdown run. Midview would answer on their next series with a beautiful one-handed touchdown catch by Wolfe from Higley. The score would remain 20-17 until the wild closing minutes.

Tonight’s player of the game goes to Braden Galaska with 114 yards receiving on seven catches including the dramatic game winner!