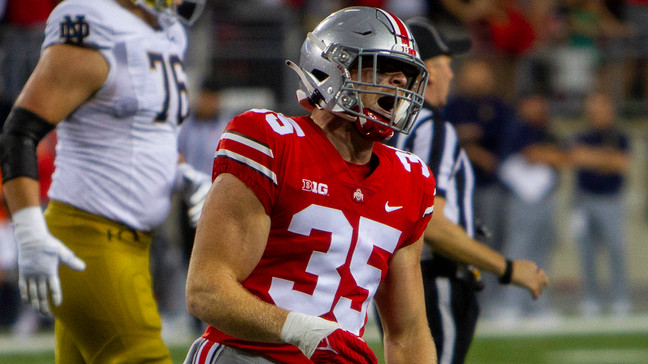 Captain Tommy Eichenberg, the Buckeyes’ leading tackler this season, is one of four finalists for the Lott IMPACT Trophy, the Pacific Club IMPACT Foundation announced today.

The award is presented annually to the college football defensive player who best exemplifies the acronym for: Integrity, Maturity, Performance, Academics, Community, and Tenacity. The university of the winner will receive $25,000 for the school’s general scholarship fund with each of the other three finalists getting $5,000 for their school.

Eichenberg is joined as a finalist by Will Anderson Jr. of Alabama, Felix Anudike-Uzomah of Kansas State and Tuli Tuipulotu of USC.

The awards banquet will be held Sunday, Dec. 11 at the Pacific Club in Newport Beach, California and live streamed at lottimpacttrophy.org. Joel Klatt of FOX will serve as the master of ceremonies. The award is named after Ronnie Lott, a two-time All-American at USC and member of the Pro Football Hall of Fame.

Joshua Perry and Jordan Fuller were Lott IMPACT Trophy finalist for the Buckeyes in 2015 and 2019, respectively, and James Laurinaitis won the award in 2008.

Eichenberg enters Saturday’s game vs. Michigan as the third-leading tackler in the Big Ten with 105 total stops. His 67 solo stops rank first and are 11 more than the next-closest player. So far this season, Eichenberg has four games of 10 or more tackles, including a season-high 15 at No. 13 Penn State on Oct. 29. He’s added a team-high 12.0 tackles for loss (minus 30 yards), an interception (which was returned for a touchdown), two pass breakups and five quarterback hurries.