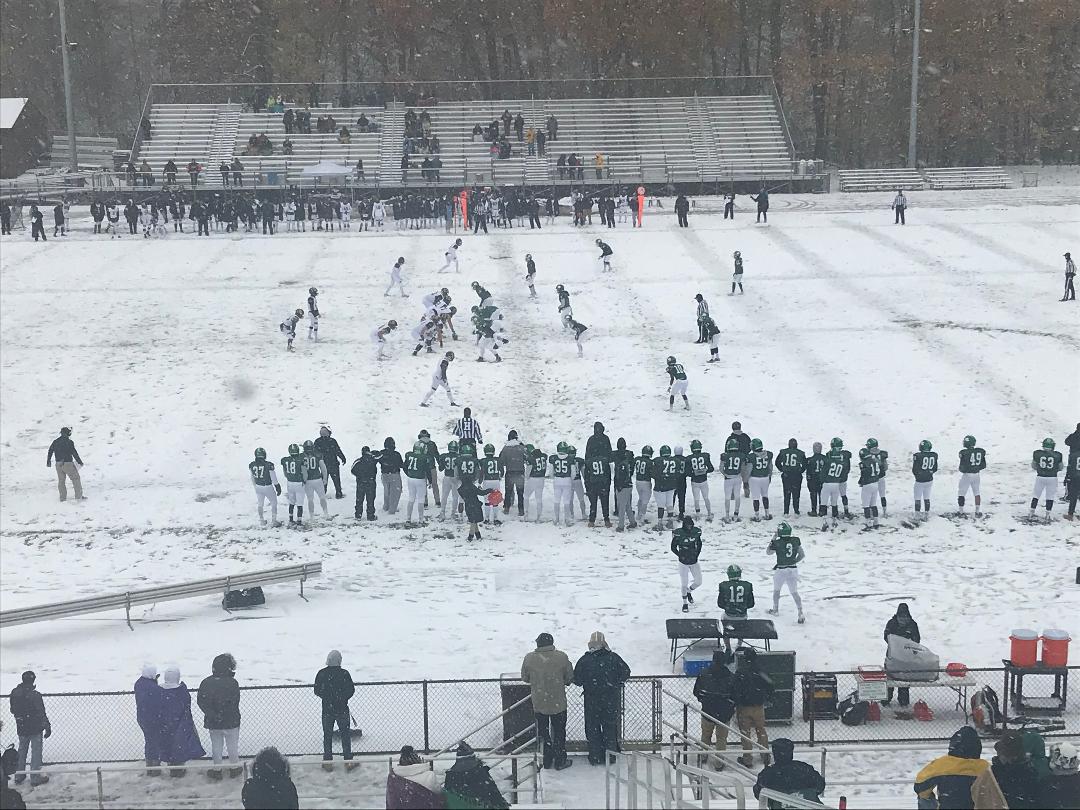 PAINESVILLE, OHIO – The Ohio Dominican University Panthers used a monster first half in the blowing snow as they defeated the Lake Erie College Storm 62-6 on Saturday (Nov. 10) afternoon at Jack Britt Memorial Stadium.

“We had a couple of nice drives to start the game,” said Panthers head coach Kelly Cummings. “I think the turnovers on Lake Erie’s end hurt their momentum. It allowed us to really break the game open in the first half.”

Ohio Dominican started with the ball and cashed in on the first drive in the snow. After a botched snap, Evan Ernst found a wide open Wyatt McLeod down the right side for a 53 yard touchdown pass. The Panthers led 7-0 with 12:59 left in the first quarter.

Cory Contini broke the Ohio Dominican school record for receiving yards in a career with a 40 yard touchdown catch from Ernst as the Panthers pushed the lead to 14-0 with 9:10 to go in the first quarter.

The Storm halted the Panthers third drive with a interception by Kelvin Bazmore but the Storm could not capitalize. Ohio Dominican led 14-0 after the first quarter.

On the first drive of the second quarter, Ohio Dominican found the end zone with a six play, 54 yard scoring drive. Ernst connected with Willoughby South alum Devaniare Conliffe for a ten yard touchdown pass as Panthers went up 21-0.

The Ohio Dominican defense followed with a scoring play on Lake Erie’s next drive. Nick Isaacs stripped Javarian Smith and Chase Axelrod from Eastlake North returned the fumble 20 yards to the end zone. The Panthers led 28-0 with 13:00 left in the first half.

For the second consecutive drive, the Panthers defense forced a Lake Erie turnover. With Lake Erie backed up inside the ten yard line, Julian Linkhart made a leaping grab at the sideline for his first interception. Ernst added a one yard touchdown pass to David Turner as the Panthers took advantage of the Storm’s second turnover. Ohio Dominican led 35-0 with 9:14 left in the first half.

On the second play of the Storm drive, Jalen Christian picked off a Smith and returned it 25 yards to the endzone. Ohio Dominican made it 42-0 with 8:13 left in the first half.

Fred Pitts scored on a 20 yard touchdown run that gave Ohio Dominican a 49-0 advantage with 6:05 left. That was the halftime score at Jack Britt Memorial Stadium. Ohio Dominican outgained Lake Erie 279-30 in the first half of play.

After a defensive third quarter, Lake Erie broke the shutout in the fourth quarter. A 14 play, 73 yard drive was capped with a one yard touchdown run by Xavier Pulliam on fourth down. The extra point was blocked by Dauson Dales, making the score 49-6.

Malik Moore scored a 66 yard touchdown run for the Panthers, his first career touchdown. Ohio Dominican led 56-6 with 9:15 to go.

Moore capped the scoring with a 23 yard touchdown run in the closing seconds as the Panthers completed the 62-6 rout of Lake Erie.

For the Panthers, Ernst was nine-of-ten with 144 passing yards, four touchdowns and one interception. Pitts was the leading rusher with 116 yards on 15 carries and one touchdown. Moore added a career-high 92 yards rushing on four carries and two touchdowns. McLeod had 61 yards receiving on three catches.

Lake Erie got 116 passing yards on six completions from Wyatt Smith, who ended the game in place of Javarian Smith. Pulliam rushed for 48 yards on 13 carries and one touchdown.

The Panthers defense ended with six sacks of Lake Erie, along with three interceptions and two fumbles.

Ohio Dominican could be advancing to the NCAA Division II playoffs depending on what happens in the Super Region One rankings. They entered Saturday with the ninth ranking in the rankings, the top eight will advance.

Lake Erie fell to 0-11 overall and 0-7 in the G-MAC, the second winless season in the last three seasons.