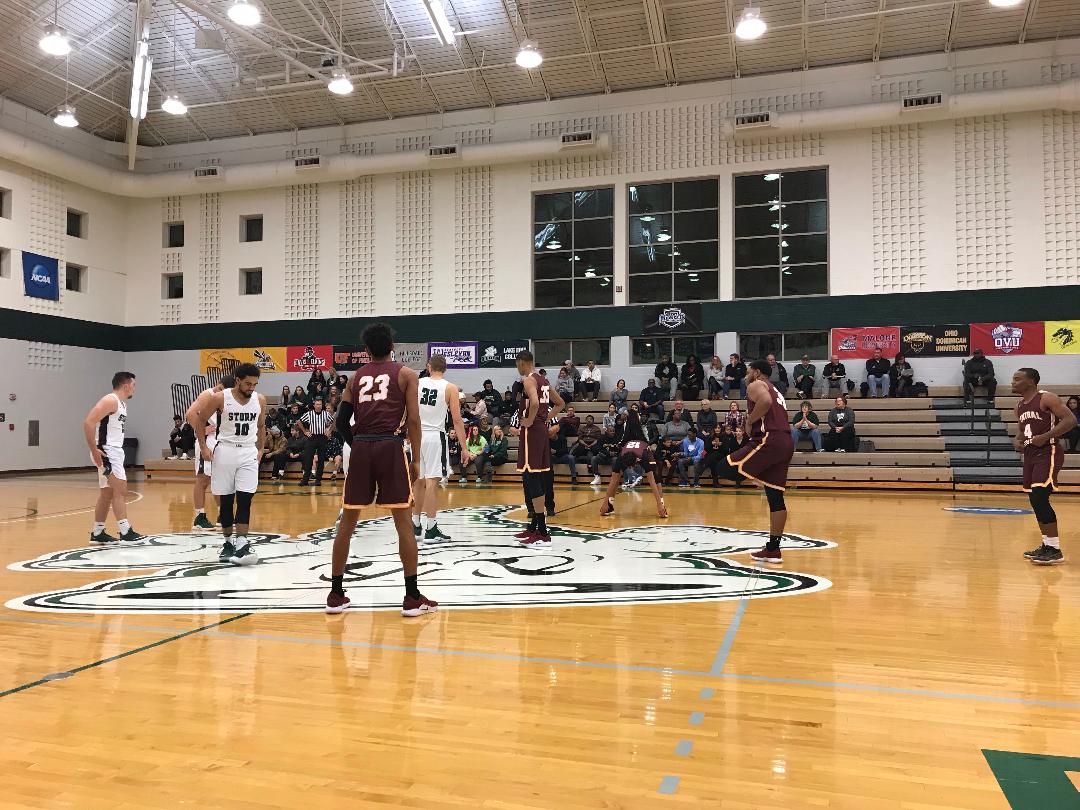 PAINESVILLE, OHIO – The Lake Erie College Storm went wire-to-wire in a 88-65 win over the Central State Marauders on Wednesday (Nov. 14) night at the Osborne Center. Lake Erie is now 2-1

“I was really happy to see us come out and impose our will on the defensive end,” said Storm head coach Kyle Conley. “Our team will be built on defending the basketball and rebounding. The last two games, we have done a great job and we have made things difficult on offense so far. That’s something I am glad of on Sunday and tonight.”

Over the first three plus minutes, the Storm took control with a 13-0 run leading into a Central State timeout. Harrison Riggs scored the first five points, Mitch Loomis added four straight and David Dunnigan and Erron James each scored two points on the run.

After the timeout, Central State answered with a 7-0 rally. Orion Monford scored four points as the Marauders trimmed the lead to six before the Storm called a 30 second timeout with 14:50 left in the half.

Lake Erie pulled away with a 21-4 run over the next seven and a half minutes. Six different players scored for the Storm, including five from James, and four each from Gabe Kynard and Kevin Peterson. The Storm’s lead expanded to 23 with a 34-11 score.

Dorian Crutcher made a jumper for Central State that ended the run but the Storm bounced back with baskets by Ennis Thomas and Dunnigan, taking a 25 point lead, 38-13 with 4:19 left in the first half.

The Marauders put together a 6-0 run, pulling within twenty points with under three minutes left in the half. Martin Oliver, Tom Johnson and Michael Reeves all scored for Central State as they closed the gap to 38-19.

Brogan Scott nailed a three pointer for the Storm, but Central State ended the half on a 6-2 run. Lake Erie led Central State 43-25 at halftime.

The Storm came out of the gates in the second half with a 7-0 run as they pushed the advantage to 25 ninety seconds in. James hit a three pointer before Loomis and Kynard followed.

The teams went back and forth with baskets over the next three minutes. Both defenses held each other scoreless for two minutes before Kynard converted a three point play with 13:18 to go. Lake Erie led 61-35.

Central State responded with four straight points by Johnson and Dwight Richards Jr. The Storm used an 11-2 run to open the biggest lead of the night at 31 points with 9:06 to go. Scott and Riggs each hit a three pointer during the run, pulling Lake Erie up 72-41 as Central State called timeout.

The Marauders trimmed the lead to under 30 with a 7-1 run after the timeout. Three different players scored as the visitors made it 73-48.

Central State outscored Lake Erie 17-15 in the final seven minutes but Lake Erie’s large lead was too much as the Storm defeated the Marauders 88-65.

Kynard led all scorers with 16 points, ten in the second half and five assists. Riggs ended the game with 13 after eight in the first half. James added 12 points, five rebounds and five assists. Dunnigan had ten points and seven rebounds. Ten different players scored for the Storm. Peterson led the Storm with eight rebounds.