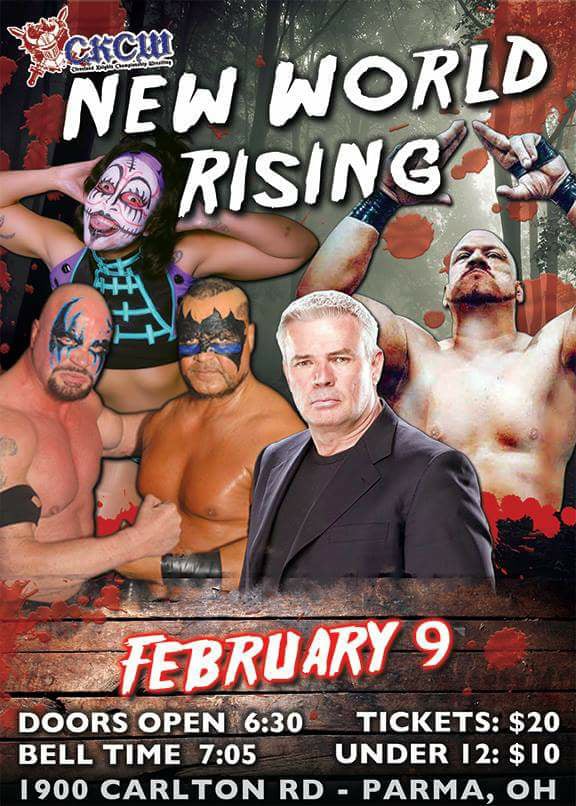 One thing we do know, Eric will be in Cleveland to address it all Feb 9, live and now on Ippv according to promoters of Cleveland Knights Championship Wrestling.  Inside sources have reached out and confirmed that Bischoff will be in town that very weekend, all signs point to him making his appearance and forever changing the face of CKCW wrestling. He went as far as to confirm it on twitter earlier this week.

The issue at hand and what has everyone talking, is his recent comments on twitter, and also a story ran on Yahoo about the subject about possible ownership with the product.  That appears to be a bit of hyperbole, but with Bischoff, one never knows.

While a chance to meet with Eric Bischoff is reason enough alone to buy a ticket.  You will also have the chance to meet such wrestling legends as The Powers of Pain The Warlord and Barbarian along with Tracey Smothers.

Tickets for New World Rising are now on sale.  Remember they sold out the chairs at their last show, so you want to get your tickets as soon as possible.

VIP tickets come with a ringside seat, slice of pizza, beverage, and an event Tshirt along with
exclusive access pre show that will allow you to meet Eric Bischoff, CKCW World
Champions J-Rocc and Vanilla Vargas, The Barbarian, The Warlord, Kongo Kong,
Tracey Smothers and all the CKCW stars before everyone else is let in the doors.

CLICK ON THIS LINK To Buy Your Tickets Now