Nets Firepower Too Much Despite Garlands 46 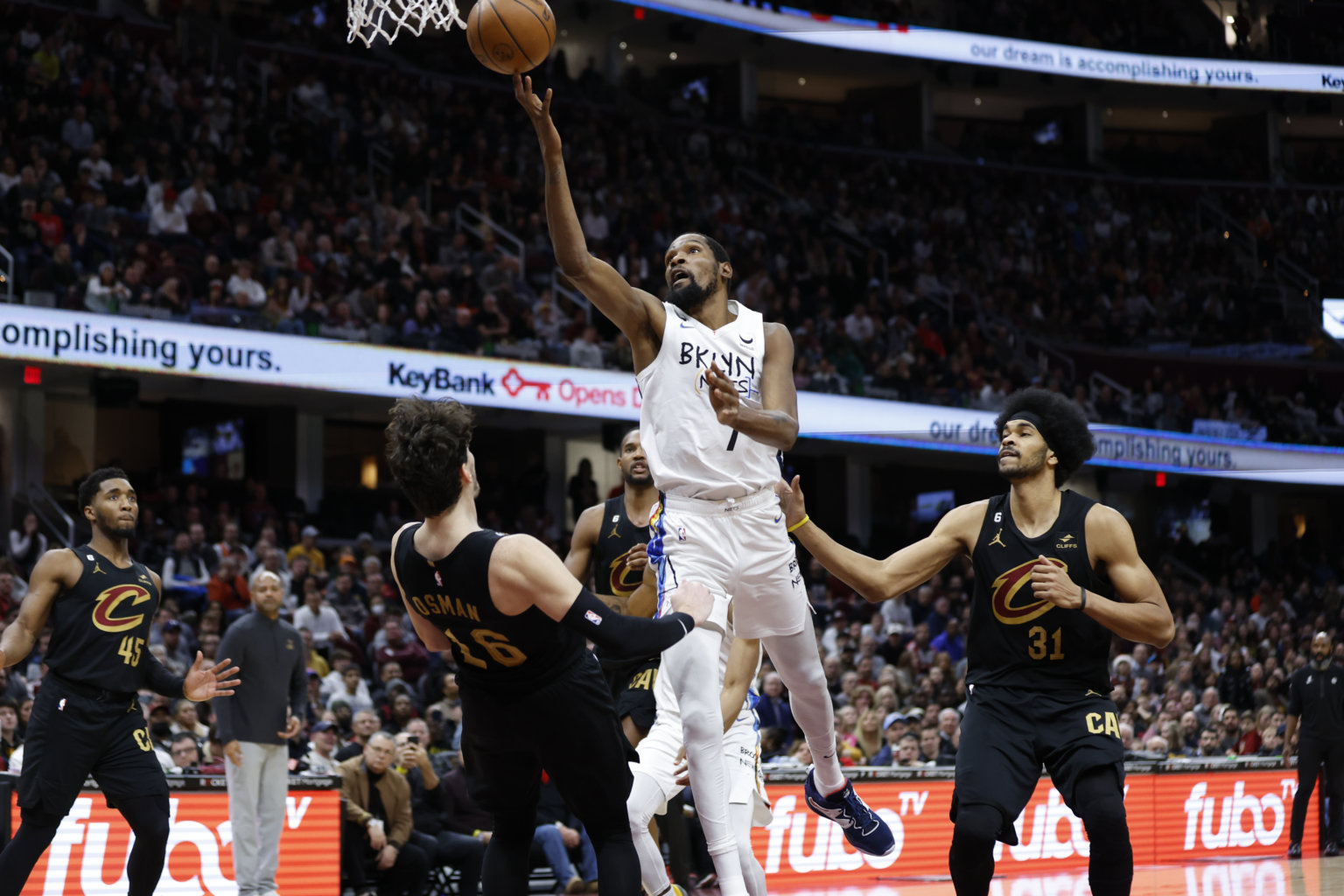 The Brooklyn Nets, brimming with confidence after winning 8 games in a row and 12 of their last 13, just got a little hotter. They defeated the Cleveland Cavaliers 125 -117 at Rocket Mortgage Field House in Cleveland.

The Nets firepower was provided by Kevin Durant and Kyrie Irving each with 32 points. T.J. Warren chipped in 23 for the Nets. They also combined to shoot a sparkling 14 for 23 (61%) on three pointers, with Irving an electric 7 of 11 from deep.

That superb shooting was necessary, because the Cavalier’s Darius Garland was even hotter. Garland tried to will Cleveland to a win, going 14 for 20 from the floor, and 5 of 7 on threes, along with 13 of 15 free throws.

Garland saved his best for last, scoring 18 points in the 4th quarter. He was creative with some dazzling floaters and drives, plus two three pointers and four free throws. But it wasn’t enough.

Darius Garland knocks down the triple, giving him 3️⃣2️⃣ on the night thus far!#LetEmKnow pic.twitter.com/AeiDh7nrKc

Garland needed more help all game long, but high scoring teammate Donovan Mitchell had an off-game for him. Mitchell scored only 15 points, which is 14 less than his 29 point average. Evan Mobley chipped in 12 points, and Jarrett Allen had 10.

The Cavs were down by ten points at 121 to 111, with 2:06 left.  They forced two Net turnovers, and scored six straight to make it a four point game, with 44 seconds left. The crowd was rocking, as the Cavs were storming back late!

But Osman crowded Irving down the sideline, and ended up fouling him. Only 3 seconds had elapsed on the clock, and Irving was barely at half court. Even worse, Irving is a 92% free throw shooter, and basically doesn’t miss at the line late in games. The Nets lead was back up to six points.

Nets Firepower, Depth and Bench Contributes in the First Half

The Nets outscored the Cavs by 12 points in the first quarter, and 4 more in the second, for a 65 – 49 halftime lead. Although they were led by Durant and Irving, both T. J. Warren and Yuta Watanabe contributed mightily off the bench. They alone outscored the Cavs combined bench 33 to 28.

Lamar Stevens and Isaac Okoro are low scoring defenders, but with Mitchell struggling, their offensive deficiencies really hurt the Cavs tonight. Opponents often leave them wide open – for a reason. They were a combined 3 for 11 for 8 total points in 33 minutes of playing time. Stevens also had three ugly and ill-timed turnovers.

Durant and Irving are extremely tough to defend, and they generally can have their way with strong NBA defensive players. When Stevens and Okoro are in the game for defense, it often feels like the Cavs are playing four against five on offense.

It is easy to look at the boxscore, and say Mitchell didn’t score enough. The guy is human, and will have a 5 for 16 shooting night like tonight. But he did play hard, and his hustle on D was noteworthy.

The defensive pressure leads to the score, and the @cavs make it a 2-possession ballgame!#LetEmKnow pic.twitter.com/pyXMj5cuAk

The positive take away from tonight’s game is that Garland has the talent and skill to take over games, and he can do that and play cleanly. I have been critical of Garland’s penchant to be sloppy with the ball, but tonight he had one measly turnover in 40 minutes. He had the ball in his possession a ton of time, and played very cleanly. He also had 8 assists.

The Cavs have a short two game road trip. They play the Indy Pacers on Thursday 12/29, and finish the year at Chicago on 12/31.