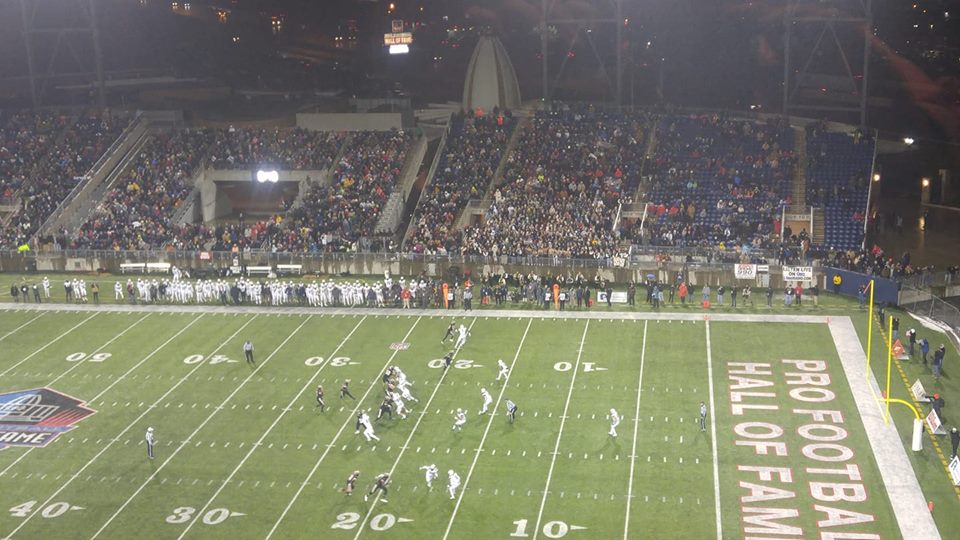 It was an outstanding weekend in Canton for this years OHSAA State Championship Football games.  All 14 teams deserved to be there, and despite some of the results, no one should hang their head low.

From a thrilling game on Thursday night between Archbishop Hoban and Massillon, to a dominant performance by Evan Prater and the Wyoming Cowboys, the weekend saw a little bit of everything.

Here now, is our awards from the weekend on what stood out the most to us.

Players of the Weekend

Evan Prater of Wyoming:  This young quarterback dominated the Girard defense helping his team to a 42-14 route.  Prater ran for 242 yards and scored two touchdowns.  He also threw for 149 yards and two more passing touchdowns to Joey Edmonds.

Logan Domer of Orrville: This quarterback also had a huge day rushing the ball in his teams 49-35 win over Monroe.  He compiled four rushing touchdowns on his way to 207 yards, and did all of that on only 10 carries.  He had touchdowns runs of 61, 60, 36 and 13 yards.

Quintel Kent of St Edward: This Michigan commit had the game of his life.  His performance helped turn the game around and the Eagles handed the Colerain Cardinals their first loss of the season at 24-10.  Kent broke through the suffocating defense of the Cardinals to help engineer a second half explosion that saw the Eagles outscore their opponents 17-0.  Kent finished with 120 yards on 8 catches with two touchdowns.

Jon Tomcufcik of Kenston: He threw for 285 yards and 3 touchdowns in the Bombers blowout of the Archbishop Alter Knights.  He rebounded from an early fumble to have an outstanding game.

Tyris Dickerson of Hoban: The excellent tailback went for 211 monster yards on the ground with a touchdown during the classic with Massillon.  He also caught a touchdown in the air as well en route to the school’s fourth straight title.

Game of the weekend

Archbishop Hoban vs Massillon: It was billed as one of the greatest matchups in OHSAA history, and it lived up to the hype.  Massilon nearly overcame a 34-7 halftime deficit to stun the entire state of Ohio with a wild second half comeback. At one point it was 34-28 with 9 minutes to go, and the Tigers were about to get the ball back before a fake punt changed everything.

Play of the weekend

Archbishop Hoban’s fake punt: Up 34-28 and clinging to the lead, Hoban was forced to punt the ball back to the red-hot Massillon Tigers offense with 9 minutes left in the game.  Or so we all thought.  Coach Tim Tyrell called for a fake punt and converted it.  A few plays later they scored the games clinching touchdown.

Comeback of the weekend

St. Edward: The St. Edward Eagles trailed 10-7 at halftime against an unbeaten Colerain team.  From there the Eagles came out on fire in the second half with impressive performance by running back Jordan Castleberry, wideout Quintel Kent and quarterback Garrett Dzuro.  Also, a defense that was lights out in the second half!

Team of the weekend

Kenston: It is hard to argue with the 42 – 6 pounding that the Kenston Bombers put on Archbishop Alter.  The Bombers actually fumbled on the first play of the game, and trailed 6-0 before rattling off 42 straight points. They dominated every inch of the field and looked extremely impressive in route to a Division III State Championship.