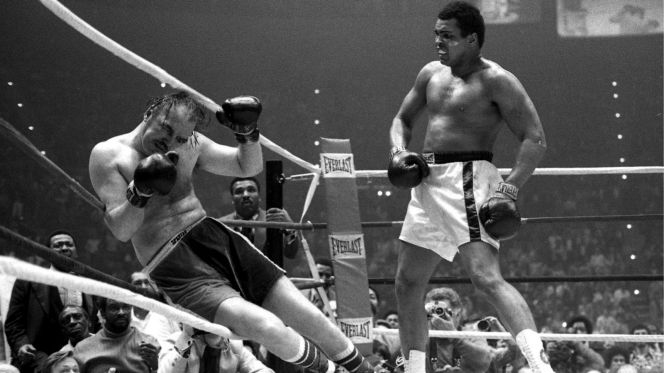 The passing of the greatest of all-time has spawned thousands of memories today, as Muhammad Ali has taken the final step into immortality with his passing on Friday night at the age of 74.

Many today in Northeast Ohio are recalling one of the most captivating fights of Ali’s career, one that took place in Cleveland at the old Richfield Coliseum, as he took on 40-1 underdog Chuck Wepner.

What was supposed to be a cakewalk for Ali turned into a fight that many say was the driving force for the box-office smash hit ‘Rocky,’ a heavy underdog going the distance with the brash heavyweight champion of the world.

The fight between Ali and Wepner took place on March 24th, 1975, and while Wepner, known as the “The Bayonne Bleeder,” didn’t win, he stunned the sports world by going 15 rounds with the champ in a loss by decision.

The fight remains one of boxing’s shockers. Not because the 36-year-old Wepner won; he didn’t. Rather, because expectations were so low; the 40-1 long-shot was expected to last only a handful of rounds.

Instead, Wepner took Ali into the 15th round. Even in victory, Ali was shaken by Wepner’s showing — and, of course, going down in the ninth round.

“It was one of the most heroic underdog stories we’ve ever seen,” says filmmaker Jeff Feuerzeig, who directed the ESPN documentary, “The Real Rocky.” “Without Chuck, there is no ‘Rocky’ — which started a whole new kind of American underdog story structure that has become a big part of Hollywood. It all goes back to Chuck.”

The fight had another Cleveland connection, as it was put on by Cleveland native Don King.

Though not the No. 1 contender at the time, Wepner was one of the few in the top 10 whom Ali hadn’t already faced. It also worked in Wepner’s favor that he was white — King didn’t want Ali to face another black fighter, and Ali already had beaten Jerry Quarry and George Chuvalo — a fact that the famously mouthy Ali attempted to exploit during the lead-up to the fight at Richfield Coliseum, located halfway between Cleveland and Akron.

“He had buttons made up, ‘Give the white guy a break’,” Wepner said of the Ali hype machine. “In those days it was usually, ‘Give the black guy a break.’ He was also trying to get me to use the N-word, which I wouldn’t, and years later he said how he respected that, how I wouldn’t go along with making the fight a race fight. I didn’t believe it was, and I wasn’t going to make the fight into that.”

So the next time you watch ‘Rocky,’ remember where it really came from – that being in Cleveland in 1975 when the greatest of all-time gave a big underdog a shot to score the biggest upset in sports history, that being Muhammad Ali vs Chuck Wepner.

If you’ve never seen the fight, relive some of the highlights in the video below:

8 possible men who can buy the UFC
Was Kimbo Slice really a legend?