Monsters Participate In Movember To Raise Awareness And Money 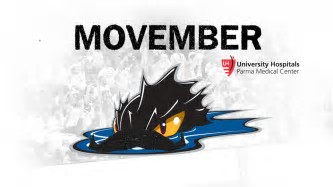 CLEVELAND – November is men’s health awareness month and several of the Cleveland Monster players and front office personnel are helping to raise awareness and money for great causes such as , prostate cancer, testicular cancer, mental health and suicide prevention.

In their past efforts, the team and the front office folks have raised $15,000 over the last six seasons.

During the month of November, fans are encouraged to join in support of men’s health issues by visiting the Cleveland Monsters’ Movember online team page at clevelandmonsters.com/movember, where they can donate directly to their favorite players’ accounts, or join the team and start fundraising themselves like I’ll be doing myself.

Fans also have the opportunity to participate in special auctions for memorabilia and jerseys by attending games in the month of November and can also get envolved at the community table located on the concourse in section 128 where they can enter raffles and support their players’ Movember effort.

Fundraising efforts will culminate with “Movember Night” as the Monsters take on the Texas Stars on Saturday, November 25th at 7:00 p

Below is the list of participants for this year’s Monsters Movember team that will look to hit this year’s fundraising goal of $10,000: