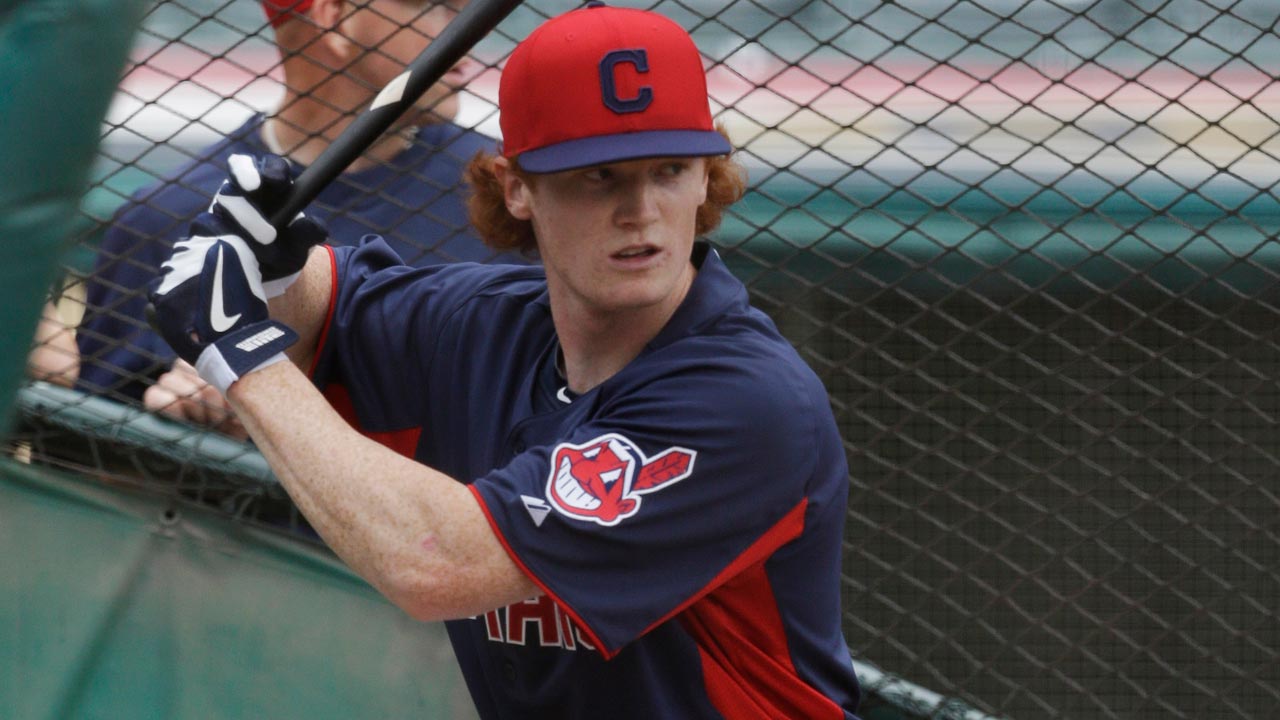 Earlier this week, MLB.com updated their rankings of the Indians farm system and included the new 2016 draft class. Cleveland remains with five top 100 prospects but there are some changes at the top.

First, Clint Frazier has passed up Bradley Zimmer for the top spot in the Indian’s farm system. The 21 year old Frazier ranks 24th in baseball, and 6th among OF’s. Recently called up to AAA Columbus, Frazier was hitting .276 with 13 HR’s and 48 RBI’s in Akron this year. Zimmer dropped a little more in the overall rankings to 35th and is the 10th best outfielder in baseball. Like Frazier, he was also just promoted to Columbus. In Akron he was .253 with 14 HR’s and 53 RBI’s. His 115 strikeouts in 340 at bats are a little bit of a concern for him.

The number three and four spots switch as well. Brady Aiken, the former first overall pick of the Astros moves up to number three. He’s currently in the Arizona league and is 0-3 with a 6.38 ERA in 18.1 IP. The Indians are going to be careful with him as he is just coming back from Tommy John surgery. He ranks 79th overall.

The power hitting 1B Bobby Bradley drops to number four. He ranks 82nd overall and fifth among 1B. In high A Lynchburg, he has belted 19 HR’s and 77 RBI’s in 95 games but is only hitting .251. Justus Sheffield, a left handed pitcher, remains at number five and 95th overall. On the year he is 7-5 with a 3.59 ERA for Lynchburg.

In terms of just the top 100 prospects the Indians grade 16th in baseball. Outside of Frazier and Zimmer, the Indians do not have another highly regarded prospect to boost their rating even higher. Having five prospects in the top 100 is the better feat for the Indians. Only the Astros (7) and Pirates (6) have more than the Indians. With the trade deadline approaching and prospects moving teams, these rankings will quickly become obsolete.

Back to the Indians rankings, there are some other notes to look for. Francisco Mejia with his 41 game hitting streak moves up to sixth overall for the Indians and fifth among catchers. He’s having a monster year at the plate hitting .347 for Lake County and then .333 for Lynchburg in 17 games there. Triston McKenzie dips from sixth to ninth but a lot of that isn’t his fault. The 18 year old owns Mahoning Valley going 4-2 with a 0.61 ERA and 0.95 WHIP in eight starts. Besides Mejia’s hot streak another reason for him dropping is the inclusion of 3B Nolan Jones.

Jones grades as the highest Indians draft pick this year. He was the second round pick for the Indians, number 55 overall, who dropped in the draft over signability concerns. It took the Indians doubling the slotted value for the pick to get him to sign. Will Benson, the Indians first round pick, looks to join the recent list of successful outfielders drafted by the team. Benson debuts at number ten for the Tribe.

Going down the rest of the rankings, there are not a lot of changes. Erik Gonzalez, the number 11 prospect and defensive minded SS has made his MLB debut. 13th overall 3B Yandy Diaz might be the next one to see the big leagues. He’s hitting .340 in Columbus on the season and with Uribe struggling and the team in win now mode, Diaz deserves a shot. Tyler Krieger, a 2B and 4th round pick last year, is moving his way up after a good season. He sits at number 18 now, and was hitting .313 in Lake County before being called up to Lynchburg where he is hitting .287.

Rob Kaminsky has been among the big droppers. Starting the year number 10, he currently sits 21st. The left handed starter is 5-7 with a 3.94 ERA in 18 starts for Akron. His strikeout numbers are very low too, notching just 62 in 93.2 innings. Mike Papi is the other one. The 38th pick in the 2014 draft has dropped 10 spots this year to 28th on the list. He was hitting just .236 at Lynchburg before being moved up to Akron where he is hitting just .190.

The Indians had a strong signing with this year’s draft class. They were able to sign their first 15 picks and 19 of their first 20. Among the current Indians top 30 prospects, seven now come from the 2016 draft. From Cleveland all the way down to Lake County, every one of those teams has a winning record on the year. Once considered a big weakness, the Indians farm system is finally being recognized again as a strength.

Oakland Collapses in Cleveland Again; Tribe Rallies Back to 5-3 Victory Over Athletics
Indians Top Oakland 6-3 for Second Straight Over A’s