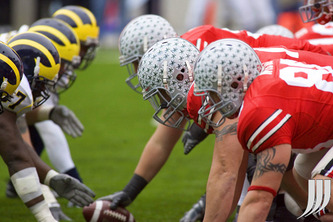 Just days away from the GAME! And Michigan is glad to Jake Moody as their kicker!

The Fighting Illini had them. Michigan was looking at their first loss of the year just before The Game. Losing Blake Corum for most of the second half and with no passing game to rely on, it looked bleak for the Maize and Blue.

Moody wins it for Michigan

But behind four Jake Moody FGs (the last with seconds on the clock) and a defense carried by some first year players, the Wolverines defeated Illinois in exciting fashion, 19-17. Michigan stays undefeated with their season now focused squarely on Columbus. Illinois, after sitting atop the West division, have now lost three in a row to drop to 7-4 (4-4 in the conference) and needing help to make the Big Ten Championship game.

Michigan took the opening kickoff 75 yards in 7 plays to strike first. Blake Corum raced in from two yards out for a quick 6.

Illinois only points came from a Griffin 29 yard field goal in the second quarter. But the Wolverines had a major problem that affects them this week. Blake Corum went down with what appeared to be a serious knee injury.

With 1:45 left in the half and Michigan driving, Corum fumbled the ball after he tried to make a cut and went down. Illinois recovered but Corum stayed down. He returned briefly at the beginning of the 2nd half but told the trainers he wasn’t right. He stayed out the rest of the game.

Then, Illinois struck in back to back possessions. Taking the kickoff the Fighting Illini went out in three. Michigan’s Moody grabbed his first FG from 46 yards out to up the lead to 10-3. But after the Michigan kickoff, the Illini marched 67 yards for a score. Chase Brown touched the ball five times and scored from 8 yards out. Michigan couldn’t stop the runs by Brown.

Now, Michigan, faced with fourth and six after ten plays and moving down the field, couldn’t convert and turned it over on downs to Illinois. Two Tommy DeVito passes and a 37 yard run by Brown and Illinois was finally in the lead, 17-10. Michigan fans were cold and now in panic! 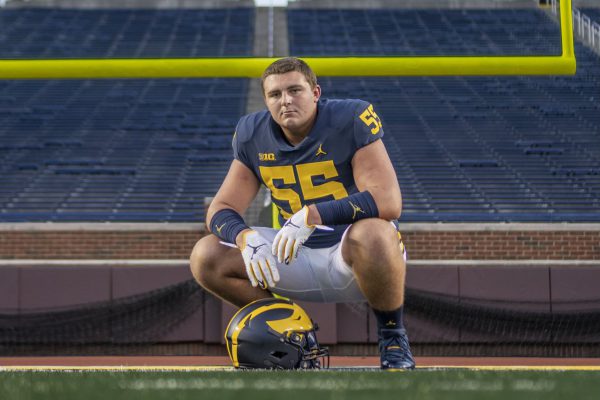 But when Michigan needed stops, up stepped the DL like freshmen Mason Graham and Kenneth Grant and senior Mazi Smith, who helped the line get some tackles for losses against Illinois so the offense could muster their field goals. With star Mike Morris out for the game, the DLine needed these stops and the two freshmen and senior did their part! For his work, Graham was the second highest rated defensive player according to Pro Football Focus and one of the highest for the first year Michigan player.

After the 41 yarder by Moody to cut the lead to 17-13, the Blue Defense held Illinois to a turnover on downs. Michigan marched 54 yards to bring it to 17-16.

Then, JJ and company worked the 8 play drive that covered 35 yards and ended with a huge FG that split the uprights by the star of the game, Jake Moody.

But, Blake and his banged up knee used his NIL money for others.

A day after hurting his knee in Michigan’s win over Illinois, Blake Corum used funds from NIL deals to donate food to families.

After the game, now the team could focus on their rivals down south!

Ronnie Bell (on when he thought of The Game):

“Once the clock hit zero. This is what we’ve been striving for all year, 11-0 to get there, and now to play The Game. That’s all we wanted, man. So, it felt good. And once the clock hit zero, to get up out of here with a win and now we get to play the game that we all want.”

“I think we’re really prepared. We really try to keep that mindset, preparing for them throughout the year in everything that we do — not just playing the game of football but with our workouts, with everything.”

Jake Moody on his kick and what he dreamed about as a kid:

“I’d say it’s even better, honestly. This is actually my first game winner I’ve ever had in my entire life. Never had one in high school, middle school, nothing like that. For it to be on my final game at the Big House, it was pretty magical. I’m just glad that we could send out the seniors on a good note.”

For the Ohio State update, check out our Garrick Pitt’s take.