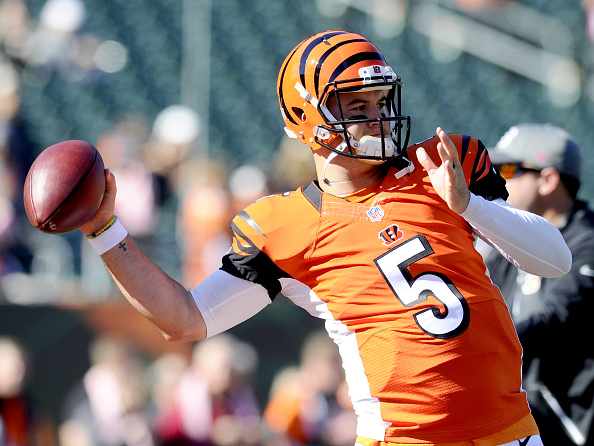 The NFL Draft is just over two months away, and there’s going to be quite a bit of things written about the Browns and their never-ending search for a quarterback.

The team has been connected for quite some time with Patriots quarterback Jimmy Garoppolo, but then there’s plenty of reports that the Pats are not going to move the backup to Tom Brady.

Today in Peter King’s ‘Monday Morning Quarterback’ there’s plenty about the Browns and their look for the next person that could line up under center, and King rightfully identifies them as a top team looking for a QB this offseason.

Here’s chatter about what the Browns may do when it comes to QB’s, with the usual name like Mitch Trubisky coming up, but also an interesting name – Bengals backup AJ McCarron, who the Browns would have to trade for.

• Cleveland (1st, 12th picks in the first round). The Browns have to get a quarterback this off-season, and the quarterback can’t be an RG3-type placeholder or a Cody Kessler-shot-in-the-dark guess. I’m guessing the Browns inquire on Garoppolo and get rebuffed—unless they offer the 12th overall pick plus another high pick. At this stage, the Browns lead the league in high picks acquired, and it’s gotten them to the bottom of the league. Now it’s time to pay through the nose if there’s a quarterback Jackson loves. Then we come to the college guys. If Trubisky’s the guy, just take him first overall, as crazy as it sounds. But if Jackson is lukewarm on the top collegians, he likes McCarron a lot (he coached him as a Bengal rookie), and can fall back on him. He’ll just have to overpay, because Cincinnati owner Mike Brown does not want to trade him. The Browns have the 33rd, 51st and 65th picks to play with if McCarron’s their man.