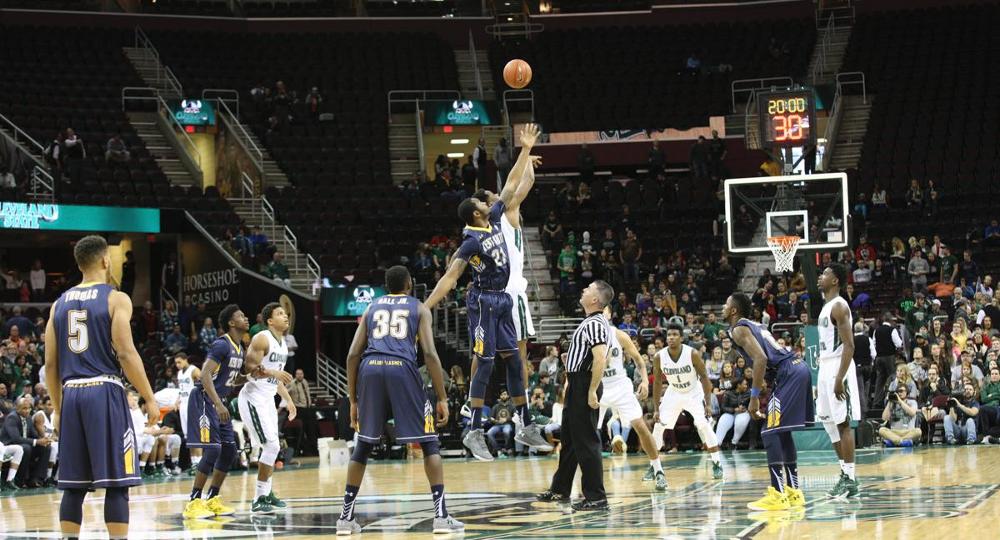 Ginny Zollo would start the Vikings off offensively with a beautiful back door cut that lead to a slam dunk for the Vikings first points.

But Khaliq Spicer would answer back with a wide open slam dunk of his own to kick the Flashes into gear.

Those opening possessions would foreshadow the rest of the half and give us a pretty evenly matched game through the first.

The Golden Flashes would switch to a zone defensive scheme halfway through the first half and force the Vikings to shoot the ball and force inside passes as well. Unfortunately for the Flashes it would be all for not, CSU’s Andre Yates would not be discouraged providing the long distance attack going 3-4 from three point range in the first half.

And Demonte Flannigan along side Aaron Scales would provide the inside attack and interior defense against the much longer Kent State back court.

The Vikings would lead the entire half right up until the end of the first with Kent State taking a one point lead going into half time with a score of 28-27.

Kent State’s Jimmy Hall would lead all scores at the half with 10 points.

For the second half, both teams would battle back and forth exchanging leads throughout, and the Flashes would switch back to man coverage and do their best to pound it inside due to their inefficient outside shooting performance.

While the Vikings on the other hand continued to shoot the ball effectively as well as force it inside to catch the larger Kent State team off guard with a solid performance in the paint by Jibri Blount who would finish with 9 points on the night.

The Vikings would remain resilient, but the size, strength and speed of the Golden Flashes would come to fruition and prove to be too much for the Vikings to handle late in the game with a final score of 66-62 giving the Flashes the win over the Vikings.

Zillow would finish with a double-double (10 points and 11 rebounds) and Andre Yates and Rob Edwards would conclude the game with 14 points each.

Spicer would lead the way for the Flashes capping off a career high performance in points with 22.

With the loss the men’s team falls to 2-6 on the season.

Next up for the CSU Men’s Basketball team is another game at Quicken Loans Arena on Saturday December 12th when they take on the Bobcats of Ohio University. Tip off is at 1:00 PM.